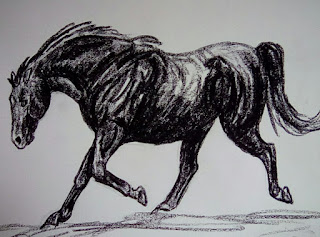 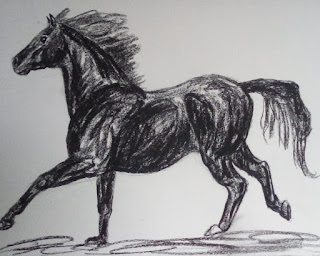 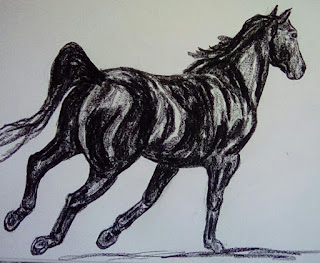 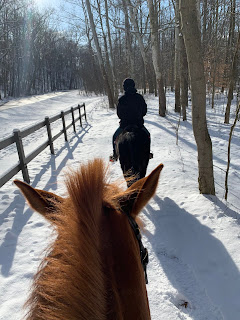 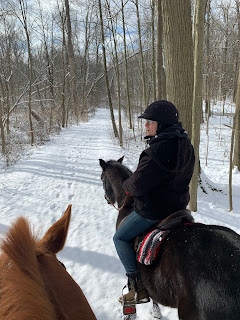 Here is Shari and me on out last snowy ride of the year.  (I hope.)  This was an incredibly easy winter for us.  I don't think there was a single week that I didn't get out in the park.  Sometimes I was just riding on the hill, but I was still in the park.

Springtime silliness shouldn't even be an issue for us.  We had our bouts of it over the winter with the brisk weather and snow, but they are so used to being out on the trail, that the only novelty that will happen this spring is warmer weather.  And that is something that will calm them down if anything at all.

That means, our big project this year is getting Ellen and Dante on the trail.  She regrets quitting early this year--never expecting the weather would allow us to continue our trail riding.  It isn't that she stopped riding.  She has worked hard in the arena while we were out goofing off.  Now, with spring on the horizon, her anxieties are starting to come back.

But, we will get through them.  We have every spring.  Soon, we will all be together on the trail again. 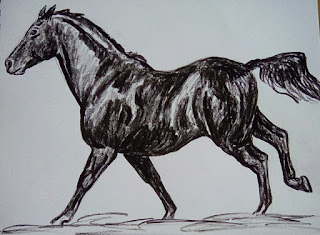 Shari and I were coming home for a great winter ride,  Ellen was accompanying us on foot.  We were nearly to our river crossing, when we saw a Great Blue Heron wading in the center of the river.  The trail is very close to the river, so we had a terrific view of him.

We see herons on the river most every time we ride.  I wouldn't be surprised if we just keep seeing the same one over and over--and it is probably this one.  Most of the time, we see them perched on the far side of the shore of the river.  It was very unusual to see one in the middle of the river like this.

Of course, we had to stop.  As he was walking upriver, Shari asked Ellen to take a picture of him with her phone; which she did.  Then she gave the phone back to Shari. 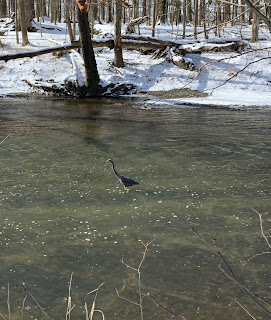 The heron continued to walk upstream.  Soon, he paused and lowered his head.  He looked like a cat ready to pounce.  Turns out, he was a bird ready to pounce.  He lunged his head into the water, opened his wings and stayed down there for what seemed to be the longest time.  It was probably about 5 seconds.

He came up with a a huge fish!  We were in awe!  I have seen herons catch little fish before, but this was a first.  Shari handed Ellen back her phone.  We were really regretting that she had given it back to Shari. 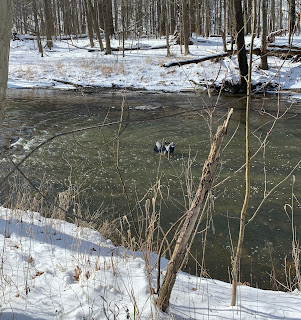 The heron certainly seemed to be please with himself as he strutted over to the far shore.  We watched as he held the fish in his jaw for the longest time before it stopped flapping.

It was only then that I realized we were lucky that the horses weren't startled when the heron made his big lunge--since we weren't paying one iota of attention to them.  All eyes were on the drama in the river.

We see some interesting things out on our rides, but this one is one that will stay in our memories for a long time. 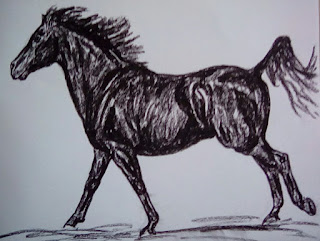 Did you ever have a saddle you just loved--it fit you so well--that you knew that's where you belonged?  I've got one of them.

I bought it at an estate sale for all of $55.00.  The billets were cracked and unsafe, but other than that, it was in terrific shape.  I don't even know if it had ever been used.  I had it repaired and later found out it was a WWII Japanese military saddle. 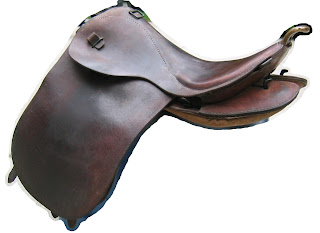 I started using it on Mingo.  He loved it.  If circumstances were such that I had to use another saddle on him, I could feel the difference in his movement--and he was less reluctant to cooperate in everything.  This became his official saddle.  I used it on him for years.  If you see the pictures of me riding him in my book, most of the time I was in this saddle.

When Mingo died, I started to use the saddle on Cruiser.  Cruiser's saddle became Cole's saddle, and it has been his saddle ever since.  Once Cruiser died, the only time I used the war saddle was when I rode Dante.  Sometimes I rode Dante just for the chance to use my favorite saddle.

In the beginning, I wouldn't even consider using it on Cole.  It doesn't have any knee rolls, and the surface is very smooth, which makes it an easy saddle to come off of.  Cole was just a bit too unpredictable in the early days.  This wasn't the saddle for him.  Besides, I didn't think it would fit him with his short back.

Not long ago, I was riding Dante in the arena, and Ellen was watching us.  She saw how well the saddle fit me and suggested I just try it on Cole--maybe it would work.  I played around with that idea, but I was skeptical.

Talk about a cognitive distortion.  One day, I put it on his back, and it appeared to fit him beautifully!  I thought maybe I should try using it on him.  I wanted to wait for the perfect day.  If he was having a hyper day, a new saddle--particularly one that he possibly wouldn't like the way it felt--might not be such a good idea.

The day I tried it on him was on a trail ride with Starry.  We had been riding a number of days in a row, and he was being consistently wonderful on each ride.  This was going to be the day.

As we started down the hill, Starry was a little in the lead.  Cole was just poking along.  Could it be because I had ridden him so many days in a row--or didn't he like the saddle?  I trotted to catch up with Starry.  He trotted slow, but steady.

Once we crossed the river, we headed down the trail at a trot.  This saddle is a little tougher to post on because there isn't the support that you have in ordinary English saddles.  When I use it a lot, I become a better rider, because i have to be more conscious of my position.  I kept adjusting my legs, but after a bit I was able to keep them under me in the proper position.

And then I tried a sitting trot--something I rarely do with Cole on the trail.  When did he get so smooth?  He wasn't Dante smooth, but he was smooth enough that I was very comfortable at a moderate speed.  This was awesome!!!  The saddle has a different sort of tree than the modern saddles of today.  It has 2 metal pieces along the side with leather straps holding them to a leather center strip.  I believe that it has better suspension because of this.  Mingo was an already smooth horse, like Dante, but I always felt he was a little smoother with this saddle.  I never noticed any difference with Cruiser.  I never expected anything quite so dramatic with Cole. 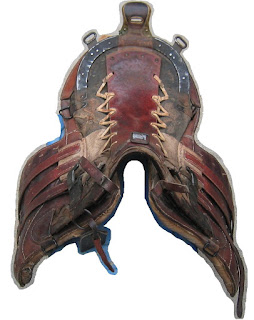 As you can see from the picture, I can completely take the saddle apart to clean.  It consists of 4 pieces that are held together with buckles. 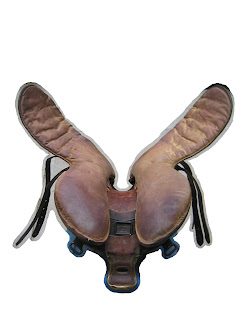 The bottom is cloth and it is filled with horse hair for padding  I did have to have it repaired where the cloth wore away.  After all, it is over 75 years old. 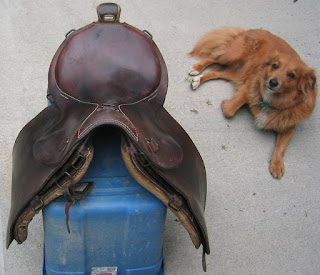 You can see the "horn" in the back.  I believe that it is to help hold a pack down.  I used to use a cantle bag on this saddle, and it stayed perfectly in place.  You just need to remember that the horn is there when you dismount so your leg doesn't get hung up on it.

(That beautiful dog is our old dog, Pollie.  She was the best dog--ever.)

I plan to start using this saddle on a regular basis on the trail and see how it goes.  When I tried it on Cole in the arena, I just couldn't stay in position when he tried his big arena trot--and he would give up.  I will probably just stick to his old saddle; which I like, too. 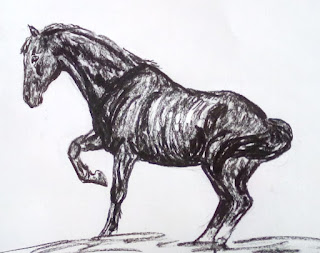