Cole going up the hill. 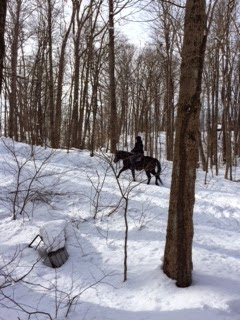 Cole in the Snow 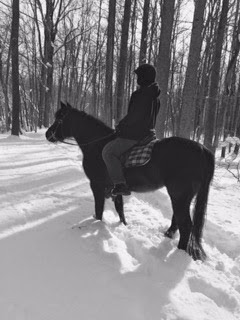 I think if it keeps snowing, I will need a bigger horse!
Posted by Judi at 12:57 PM 2 comments: 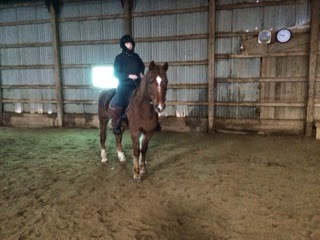 I have so much to write about that is on my mind—some good and some bad—but it is too early. I want to make sure what’s good is really good, and what is bad isn’t as bad as I think.

What I can write about, I don’t feel like writing about--the weather and the way it is ruining our riding. It’s pretty bad when I can’t manage my arena rides because of the weather, but it’s true. Some days, it is too cold to ride Cole. Ellen can ride Dante, because he is a sensible horse. Cole feels like I am riding a stick of TNT—ready to blast at any moment—and he does, too. On those days, I let him run and play and then we do our groundwork. This cold spell has to break, soon. Sometimes, it is a little warmer and I will take Cole outside and ride him around the loop, but that doesn’t give me much to write about.

I have been daydreaming about gardening and eating fresh vegetables. I still have a freezer filled with green beans, but they are steadily declining. I sure do miss looking at flowers outside. All I see is snow, snow, snow.

Maggie isn’t getting as long of walks as she should due to the cold, and she is driving Thunder and me crazy. At least she hasn’t been going on any nighttime rampages anymore. I think she may have finally outgrown them. It was really bad the night she got into the cupboard and ate a whole package of microwave popcorn…

Playtime in the Arena 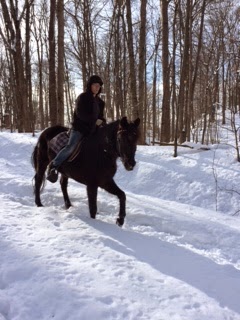 Playtime in the Arena

It was a really, chilly night last night.  When I got to the barn, it was only 5 degrees—warmer inside, of course.  It was warm enough to ride, but Cole had that look in his eyes—that crazy, intense look he gets in the cold weather.  I turned him out to play in the indoor arena, instead.

With very little urging from me, he ran around and around and around.  There were lots of bucks and craziness.  After about 15 minutes, he started to settle down.  I couldn’t find the ball to play with.  I didn’t have a lead rope with me to aid in practicing shoulder in—something I haven’t done on the ground for a few weeks, but he is doing them great in the saddle since his ground work lessons.  He was all parked out, waiting for me to do something.  We practiced bowing and silly walk.  Hs silly walk is getting as high as a Spanish walk, but he was going much faster that I’ve seen horse do Spanish walk.  He was also adding some Cole Train flair.  He was really getting into it.

I was ready to bring him in, but he parked out and refused to go.  He still wanted to play games, but I was getting cold.  On Monday, after our ride, when I did try a new ground work move—side pass.  I gently laid the dressage whip along his side from shoulder to hip.  (Yes, he is that small.)  He took some decent steps on both sides that day.

Well, yesterday when I wanted to break him loose from being parked out, I lightly touched his shoulder and hip with my hands without thinking about it.  The little guy did a spectacular sidepass.  I mean with big, definitive steps and enthusiasm.  Click time!  it was no longer too cold to work.  We did sidepasses about 10 times on each side and he did super on most of them.  I didn’t want to overdo it, and decided to bring him back in—and he parked out and got stuck again.  I think Cole would play clicker games all day if I let him.  After a few bows, I was able to dislodge him and bring him in.

I did miss the ride, but I really think he enjoyed the games much more.
Posted by Judi at 12:52 PM 1 comment:

Not Much of an Update 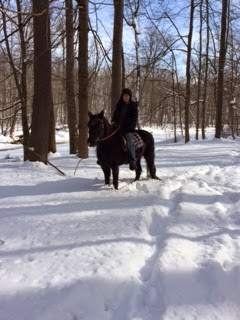 All I can say about the last few weeks—is that this weather stinks.  It has been either cold, very cold, very snowy or very snowy and cold.  The last few nights have been well below zero.  I have even missed a few rides.  I can manage to ride if it is around 20 degrees in the indoor arena, but much colder than that, Cole becomes too fractious—and I just don’t have much fun.  I let him out to play, and then we will do tricks or groundwork.

Last night, it was only 5 degrees outside, but the arena was 20 degrees, so I rode.  The long term forecast offers no hope.

Dante and Ranger behave more consistently when it is very cold, so Ellen only needs to cope with the weather—not hyper horses.

Kevin took Starry out on the hill on Saturday.  Ellen and I opted to stay inside and ride.  It was in the middle of a snowstorm.  It took Starry 15 minutes to walk to the bottom of the hill—it took him only 5 minutes to walk back up to the top.
Posted by Judi at 1:22 PM 1 comment: 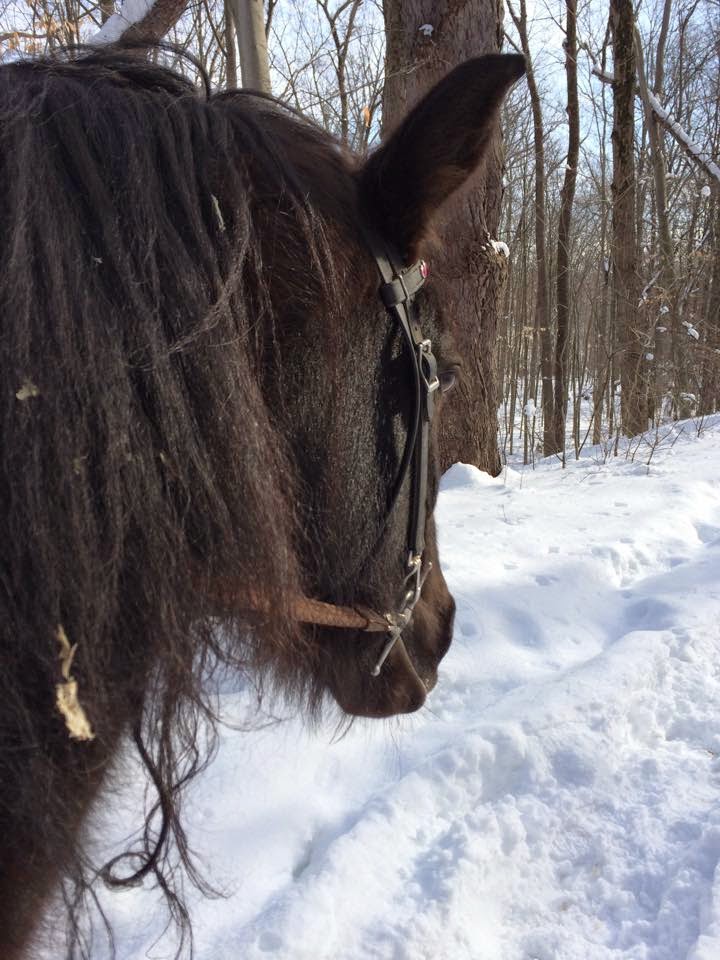 Here is proof that Cole Train's grooming is totally neglected.  Yes, he has a long and lovely mane--but I only comb it out a few times a year.  Maybe that is why it is long and lovely?

You here about them all the time--here they are. Meet Starry Decisis and Kevin. Starry is an Appendix Quarter Horse. Kevin is Irish. They are a perfect pair.
Posted by Judi at 1:11 PM 2 comments:

Cole Train in the Snow

We had a lovely weekend. They predicted rain—and we got sunshine! On Saturday, I was able to take Cole Train out on the hill—the first time in weeks. All of our weekends have been either very cold or the driveway has been too icy. Finally, everything worked out—and there was sunshine, too.

Ellen opted to play it safe with Dante in the arena, so I was on my own—well not really. Ellen walk—or I should say tried to walk with us. The snow was so deep that it made walking tough. I was glad to let Cole do the work.

I didn’t know how he would be, but he had been so good all week when we were riding outside in the back of the property that I was pretty hopeful about his behavior. I was right—he was great. When I asked him to trot, he stepped so high to rise above the snow, that I could barely ride him. After that, I decided to stick to walking.

He did jump once when a large clump of snow fell out of the tree and landed on him. Another time, he did one of his Cole Bursts. That’s when he suddenly leaps forward out of excitement. I was able to get him back to the walk, immediately, so I forgave him for it.

We rode up and down the hill three times. On the last trip up, we found Kevin and Starry on their way down.

Our mini thaw is over, and now we have lots of ice and the snow is like walking on Styrofoam. I don’t know when we will get to enjoy another trail ride. The forecast doesn’t offer much hope at all. I’m so glad I managed to get Cole out this weekend.

Like much of the country, we have been getting lousy weather. What can we expect for winter in Cleveland? Most days have been cold—very, very cold. We have had plenty of nights on either side of zero—and that is Fahrenheit, not Celsius. We have also had enough snow that I am sick of it—though we have had worse in the past.

It always amazes me how much we get used to the cold. Back in November, if it got below freezing, it was a crisis. Now, I am happy if it is over 20 degrees—and I only get really grumpy when the high for the day is in the single digits. Of course, a lot of it has to do with wind chill. On a very cold day, the indoor arena is tolerable because we are out of the wind.

Last night, it was 20 degrees in the indoor arena—and about 10 degrees outside. The sky had cleared and the temperatures were plummeting—but there was no wind. When Kevin suggested that I ride outside with him while he took Starry for a walk, I thought I would give it a try. When I got cold, I could get off and lead, too.

I warmed up Cole in the arena, and he was in the right mood. When Kevin was ready, we went outside.

We were welcomed by the brightest moon—it was beautiful. It was so bright, I think I could have read a book. The night before, 6 inches of snow fell—it glistened in the moonlight. It was so cold that the snow scrunched. The barn owner plowed us a nice path around the back of the property—Kevin and I were the only brave souls who ventured on it all day. What a bunch of sissies at our stables.

Kevin and I walked 4 times around the loop—about a mile. Cole behaved simply perfect. Starry was a little feisty, at first, but then he settled down. I never did dismount. I really have gotten used to the colder temperatures.

Just a few months ago, I would have never believed that Cole could be ridden outside in the snow on an extremely cold night—and be a prefect angel. It is always a wonderful feeling when we get to “that place” with a horse. It’s not always easy, but when you get there, it is worth every minute of the journey.
Posted by Judi at 12:52 PM 1 comment: