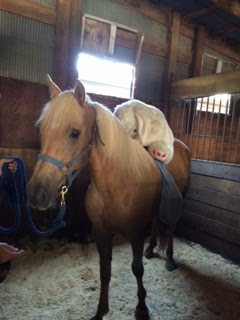 
Kevin had an idea.  He brought out an old pair of jeans, filled them with sand and we have put them on MerryLegs' back when he is in his stall.  I have him walk around the stall, and click him for quiet behavior.

Ellen had the big white bunny idea.  She brought it out this weekend.  When we were done with our lounging, we introduced the bunny.  She showed it to him on both sides.  He was worried, of course, but not for long.  I clicked him when he stood still.  Then, the bunny touched him.  He flinched, but soon, he didn’t mind it.  It wasn’t long before bunny was his back.  He got lots of carrots for that.

Later, when he was back in his stall, we put “scary legs” on him to show Ellen what we had been doing during the week.  We decided to toss the bunny on to get a picture.  He was great, and stood as still as could be with him balanced up there while Ellen took the picture.

Overall, we had a really good weekend.  His lounging is doing well, and I led him to the river twice.  On Sunday, we followed Ranger down.  This was his first time with another horse.  We had always taken him by himself.  At the bottom, Kevin was coming back from a ride with a friend, and he was a little uneasy when the horses passed him, but he quickly forgot them and said he would rather just follow Ranger.  He also didn’t like when I turned him to go away from Range—but only the first time.  The second time I tried, he was fine.  He dipped his feet in the water, but it was too high for me to lead him across.

Ranger was so nice to him, too.  Not once did he make a face or act like a bully.  He was happy to have him there and acted more like he was showing his little brother around.


The best news—he decided he can walk out of his stall and then out of the barn without a hassle!  When he readily led out on Saturday, it so caught me by surprise that I was speechless.  He has been doing it ever since.