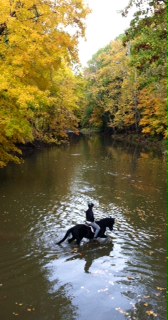 Kevin and I had the opportunity to take our horses on a long ride on Thanksgiving. Unfortunately, Ellen had to work, so we went without her. I took Cole Train, and of course, Kevin took Starry.

Life hasn’t been very cooperative, so this was only the third long ride of the year. Cole is faster than Starry over the long run, so just like in the past, we lost them a few times as we trotted along. Kevin warned me this might happen, so that I wouldn’t be alarmed when I noticed he wasn’t behind us.

The weather was unseasonably warm, so there were a lot of hikers and dog walkers on the trail. There is plenty of room to pass people on our trails, so if it is safe, I will keep going. I make sure that I never surprise or scare anyone.

We approached a dog walker who was standing off on the side of the trail. As Cole approached, he transformed and did his big, showy trot. (It is very passage-like and really something to see.) The dog walker was awed, and I laughed, clicked and treated him. That’s all it took. Cole put on a show for nearly every person we passed. Most people liked it, though some didn’t know what they were looking at. Cole thought it was fun. I thought it was funny.

We did have one problem situation. We were on our own, and there was a large group of people—half of them children—up ahead on the trail. We had been cantering, though we were trotting when we saw them. I don’t know what went through Cole’s head when he saw them, but he took off running--straight for them. I felt like I was on a bowling ball—heading down the alley—and we were going to topple some people over.

It took a bit, but I got him back down to a trot in time. He slowed enough, but wouldn’t stop. I ended up spinning him right in front of the group. They didn’t slow down, move to the side or stop—they just kept going. I had to ride through them. Cole didn’t want to walk, but did with a mixture of prancing and a few more spins. Children were running loose to the right and left. A kid asked his name. Next thing I knew, they were all screaming, “Cole Train. Cole Train.” That only added to the prancing and dancing. He put on quite a show.

Towards the end of the group, a parent reined the last of the kids in, much to my relief. Cole settled down, and the rest of the ride was uneventful. We met Kevin on the way home. He also went though the big group of people, but of course, Starry behaved perfectly.


This is all about “capturing a behavior” with clicker training. We can train a horse to do anything with the aid of a clicker. When we saw Cole stretch one morning, we thought it was so cute that we clicked and treated him for it.

I don’t know when we clicked him for it the first time, but every time we saw him do it, we clicked again. Sometimes it would be days even weeks between clicks. Last month, it seemed to be getting more frequent. We noticed he was most likely to do it when we weren’t paying attention—to get our attention. It was only in the morning when we were cleaning the stalls. We would just watch through the corner of our eyes. Anything that looked like a stretch got clicked.

Then, it happened—multiple stretches in the same morning. The stretches were morphing into a definite bow. One morning, he did it 8 times in a row! He made the connection. Now, it was time to put it on a cue. When we thought he might do it, we would say, “Bow.”

A few sessions like this, and we had a bowing monster. What he does is he stretches his front legs forward and parks out with his back legs like a proper Morgan. Then, he shifts his weight back and bows like a dog. It is adorable, but he does it over and over. A few times I had to leave the barn to get him to stop!

I have decided to only click him for mostly for doing it on command. When he does a really good one voluntarily, I can’t resist clicking that, too. The rest of the time, I am just saying “good boy.” He only does it in his stall at this time. I would like him to be able to do it out of his stall, too. I will not teach him to do it when I am in the saddle. No way.

When I get home from the barn, my little black dog, Maggie, also bows and bows and bows. I taught her without treats or clicks. She would do it occasionally when I would come home. She would stand on the top of the stairs and wag her tail. I started to say, “Bow” over and over. When she would, I would proceed up the stairs—just what she wanted. After about 10 times, she was doing it whenever I asked her—just to get me to come to her. Now, she does it all the time. I just praise her for it—better than her jumping on me or running down the cat in her excitement.

Now, all my black animals are bowing.

Oh, back to capturing a behavior. That’s what we did. Cole did something on his own, we liked it and caught it with a clicker. Then, by anticipating when he would do it, we taught him a connection between a cue, a behavior and a reward. It is like magic.

Cole is one step closer to being a circus horse.

Ranger and the River 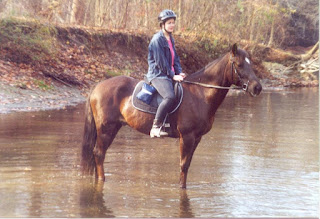 Seems like I have written about this, before. If it sounds familiar, it probably is because it is.

Ranger was sound enough to go on his first trail ride in a couple of months. Hurray! We decided that he should go with Cruiser. Wow, was he excited. He pranced and danced and looked like he was a whole hand taller as Ellen led him down the driveway and down the hill to the mounting block by the river crossing.

Ellen told me to ride on. Cruise and I had a nice, but short ride with as much trotting as his cough could handle. When we got back, there was Ranger, standing by the river. When Ellen saw us, she turned Ranger around and walked up the bank. We joined her.

She said she was at the river the whole time we were gone. Every time he turned away, she brought him back to the same spot. He was way to wound up to even try to go home or work the hill. She just tried to bore him into submission.

She could have forcibly tried to get him across, but she didn’t see it as a battle she wanted to fight. We just decided Ranger was a big dummy of a horse.

The next day, we tried it again. This time, he went down the driveway and hill just like a normal horse. When she mounted, he obediently walked down the river bank. I brought Cruiser into the water, first, and Ranger was right behind us. Once he got into the water, he motored past in his typical manner. Success. That day, he brain was in the right spot. The previous day, his brain wasn’t working well, at all. Ellen felt since he wasn’t in a reasonable mood, there was no reasoning with him. When he was in a reasonable mood, it was easy.

We had a very nice ride—mostly walking and talking. We have crossed together several times since with no problems at all. We have our Ranger back.

Well, I think there is good news for Cruiser. By Sunday, the cough lessened a lot, so I think that proves it is a case of bad allergies. I rode him yesterday in the arena, and when we first started trotting, he did a lot of coughing—and then he stopped. We worked for half an hour.


Ranger keeps improving, and Ellen said that today he didn’t seem lame at all. Our hopes are that the problem isn’t a permanent one and that it will go away in time. Right now, things are looking good for it, but I won’t get my hopes up, yet.

She has decided to buy another horse in the spring so that she won’t mind cutting Ranger’s workload back. She has one in mind, but we’ll keep you in suspense about it.

I did get to take Cole on a 2.5 hour ride this weekend. I went with Kevin and Starry. Once we got to the good trails, he told me that he didn’t know if he was going to ride at the speed I wanted to ride. He told me to just go on. We left them in the dust. 3 miles later, I turned around and walked until we met them. I had a great time. I haven’t been able to ride Cole like that since last spring. It was wonderful. We mostly trotted, but he really moved out like a Morab should. I think he had fun, too. Surprisingly, the trails out that way weren’t affected much by the storm. I could see where a lot of trees had fallen over the trail that the park had to cut up.

On Sunday, Ellen and I took Cole and Starry for a 1.5 hour ride. They were much quieter than the day before, but they still had enough energy to give us a lovely ride.

The season is winding down, fast. Hopefully, next year will be a better year for riding—and just a better year, period.

Time Catches Up with Us

Time Catches Up with Us


Ranger has had 2 hoof abscesses causing off and on lameness and Cruiser has a cough. It was time to call the vet.

I couldn’t be there because of work, but Ellen was. The results of the examinations—we have old horses. It seems like just yesterday, they were young. How did this happen?

With Ranger, it wasn’t a case of hoof abscesses not healing well. They did heal. It was just coincidence. The vet feels he may have an age-related problem like ringbone, or possibly he hurt himself, and it is taking a while to heal. She said that nerve blocks could possibly give a clearer definition, but she knows Ranger well enough to know he wouldn’t tolerate the process. Ellen agreed. Light riding is fine, and that is what she will do.

Cruiser’s cough is due to dust, which I thought originally, but when I gave him a round of steroids, and they didn’t help, I got worried it was something worse. She gave me stronger steroids to try. He also has developed a heart murmur. She said that light riding is fine.

We have two old horses. We will be doing a lot of geriatric rides and make the best of it. Honestly, we are just happy to have them. They are both high-mileage horses. Cruiser is 25, and we just celebrated his 23rd anniversary. We don’t know how old Ranger is, but Ellen is going to celebrate his 17th anniversary, soon. Every day is a blessing, and if we can still ride them, it’s all the more a blessing.