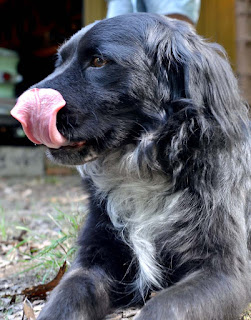 Maggie, aka Dumb Dog.  I never wanted her, but when Pollie died, my dad missed having a dog so much.  He was lonely and talked me into finding him a dog.  I picked out one on Petfinder that had a cat in the picture.  You see, I wanted a dog that would be good with Thunder.  Maggie was from a cat rescue organization.  They must have been relieved to get rid of her.

She was annoying and so dumb compared to genius Pollie, that she got her nickname Dumb Dog.  Since I lived with Dad, that meant I had to walk her and play with her.  I wasn't too thrilled with this.

Anyway, when Dad died, I inherited Maggie.  I tried to find a home for her, but no one wanted her.  Thunder and I have decided to keep her, since he likes to stalk and pounce her.  Sometimes, I even like her.  She is a good watch dog, usually behaves with Thunder and loves people.  She is a lot of fun to walk, and she keeps me in shape.

As a rescue dog, I don't know what her past was, but I doubt if it was a good one.  She was found on Train Avenue, in Cleveland--not a good area for dogs.  She didn't know how to play, what "good girl" meant, is afraid of towels, won't let you catch her if she gets loose. was afraid to go outside by herself and loves to wander along streets looking for garbage.  She basically acts like a very immature puppy--all the time.  I actually think she had a development problem--possibly due to neglect at an important time, abuse or poor nutrition.

She has improved over time.

She is a Sprollie, I think.  That's a spaniel/border collie mix.  ﻿She is a totally adorable dog with a very thick, soft coat, a very short tail (but natural--according to the vet) and is very athletic.  She loves to swim and chase ducks. 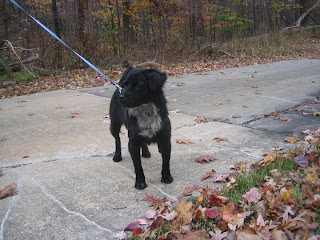 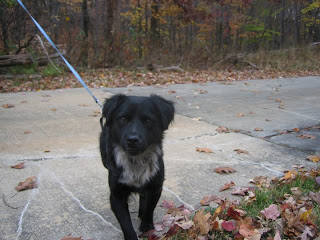 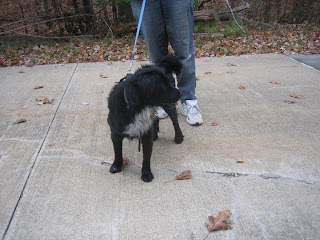 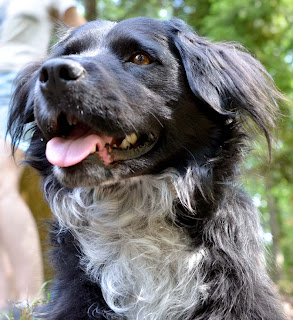 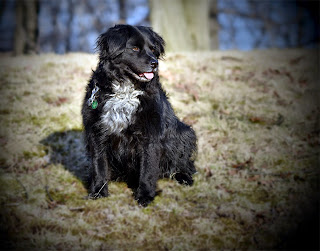