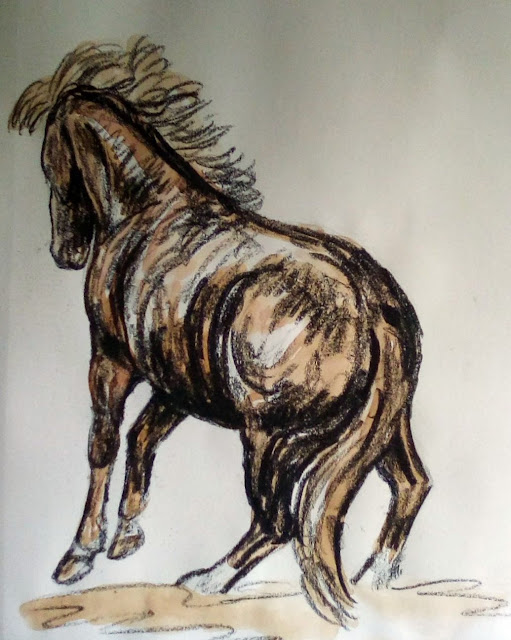 The Bravest Person I Know

The Bravest Person I Know
For those of you that have been following our adventures for a while, you probably remember that Dante will sometimes spook at airplanes.  That is a problem when your barn is about a mile from the airport.
He started doing it the very first year that Ellen had him.  The first time was when I was riding him by myself, and it really caught me by surprise.  After that, he spooked occasionally for years.  My sister got into the habit of stopping him and asking him to stand as the plane went over.
Last year, in the spring, he got really bad.  It seemed he spun at least half of the time--even when he was already at a stand still.  He was  doing it in the driveway and on the trail.  Ellen is anxious, by nature, and it really go under her skin.  To me, it was like the old Godzilla movies that we watched when we were growing up.  Hearing an airplane in the distance was like hearing Godzilla's footsteps coming our way.  The tension would start to build as soon as she heard the plane in the distance.
After a reduction in grain, he improved dramatically.  When he did spook, he would just spin; rather than take off running like before.  It became manageable.
Ellen noticed that he only seemed bad when the planes were landing.  Since he always spins to the left, she learned to bend his head to the right to minimize the spin.  Her biggest fear was a plane going overhead while she was crossing the river because he might slip if he spooked.  That happened a few times, but he didn't spook.  She was starting to feel better.
The one thing she didn't do last year was go on the trail the other direction where she had to ride up a hill.  When the planes are landing, it looks like they are going to hit the trees--they are that low.  She didn't tackle that problem mainly because we just ran out of time.  Winter came too soon.
She is doing so much better this year with her anxieties.  They are still there, but she is learning techniques to keep herself from distorting reality.  Huge problems are no longer insurmountable.  It is now time for her to expand her horizons.
When we ride over the hill, the trail splits.  One direction continues on through the park.  The other way is just an access trail that dead ends at the street.  That was our goal.
The first time we rode it, Ellen was very nervous.  There were no planes because Covid-19 is still affecting plane traffic.  The ride was a total success.
The next time, the planes were taking off.  Ellen was very nervous; once again.  This time, 3 planes went over us.  Dante was fine, but that wasn't a surprise since he is really good when the planes are taking off.
The next day, the planes were landing.  I knew it, and Ellen knew it, but neither of us said a word about it.  I wasn't sure if she would try the Access Trail with the planes landing, but she surprised me.  After all, Dante hadn't actually spooked at a single plane this year.  Though her anxieties told her to just go home, she rode on.
Yes, she is the bravest person I know.  She stood up to her fear--and Dante spooked at a plane--twice.
The first time, he was doing all right until he saw the shadow of the plane going across the trees.  He has always had trouble with the shadows.  He tried to do a fast spin to the left, but since Ellen had him bent to the right, it was a slow spin, instead.  He made it about 180 degrees.
We were so disappointed.  In my heart, I was hoping that all of Ellen's work with him helped him get over his fear of planes.  Ellen was also shaken up.
We seldom get just one plane at a time.  In a of couple minutes, another plane approached.  Ellen set Dante up, and this time, he only took a couple steps when he saw the shadow.  I have to wonder if he would have been fine if a third plane flew over.
The big question was how would Ellen interpret what happened?  Would her anxieties distort reality?  Would she be able to look at the whole incident logically?  Ellen is a very good rider with an excellent seat and very good timing.  This is something she can handle with ease.  Dante's worst is nothing like Ranger's worst.  Ranger trained her to handle all sorts of predicaments.  This is a piece of cake for someone as talented as Ellen.
We haven't had an opportunity to test Dante on that hill with planes taking off, yet.  Maybe next week.
The following day, Ellen was telling Shari the story of Dante with the planes.  It made me smile to hear that she didn't blow it out of proportion.  She told the story just how I am telling you.  She faced her fear and Dante gave her his worst--and it wasn't more than she could handle.  In fact, it was easy--and I think she realized it.
She tackled her fear--faced it head on.  She is the bravest person I know.
Posted by Judi at 7:05 PM No comments:

Sometimes You Just Need to Talk Things Out

Sometimes You Just Need to Talk Things Out
My sister has been crossing the second river crossing on Dante on a regular basis.  Since the incident where she fell on the ford, it just makes more sense.  They will have plenty of opportunities to go across on the ford when the river is higher--since it is very busy with summer traffic, the river is a better place.
But there is a reason that Ellen doesn't like the river there; even when she is no longer nervous on it.  Dante just goes so slow.  He is slow to step into the water, and he stops often.  It is very frustrating for her.  I swear, sometimes it takes 10 minutes/
This river crossing is a little wider and quite a bit deeper than the first one, but there is hardly any current at all.  We do have to maneuver around some rocks if we want to stay out of the deeper area--which can be tricky, but that shouldn't bother Dante any.
We were on our way home the other day.  I already crossed the easy first river crossing and was watching from the other side.  Dante walked right down the bank and stepped into the water.  He then crossed the river and came up the other side--just like any ordinary horse.
I mentioned to Ellen how strange it was that he is so good with that crossing and so terrible with the other one.  Now, he wasn't always this good on the first river crossing.  He used to do all the same things.  That is when she told me how determined she was last year to get across the water before an airplane came over.  Last year is when he got really bad about spooking at the airplanes, and they are very loud and low by the river crossing.  The bottom of it is extremely slippery shale--not a good place for a spook.
She mentioned that she noticed she is getting distracted by every noise at the other river crossing and wondered if that was playing into Dante's reluctance to cross.  He is very sensitive to her every move.
This gave us food for thought.  Could she improve his crossing by improving her focus?  It had helped her considerably in the arena.  We both pondered it.
My sister and I are alike in so many ways, but this isn't one of them.  I can easily focus on the task at hand and block everything else out.  I don't even have to try--that is just how I am.  I remember when I was in college many years ago and I worked at a gas station.  I used to be able to blast the radio, keep an eye on the self serve and full serve pumps, wait on any customers and study for tests--all at the same time.  I always forget that many people don't have that gift and have to work at it.  It never occurred to me that Ellen might be having an attention problem.
Well, Ellen decided to work at it the next day.  Shari and Kevin rode on ahead of us.  Ellen took Dante down to the river, clicked him when he stepped into the water, asked him to cross--and he did!  Just like that!  He just crossed the river!  I was in shock.  So were Kevin and Shari when we caught up with them much quicker than expected.
On the way home, it went even better.  That time, Shari and Kevin watched and were in awe.  They wanted to know what Ellen did differently, and she told them the story.
I knew Dante would do better, but I never expected such immediate and dramatic results.  We feel that with practice, Dante will simply get into the habit of crossing like a regular horse.  After all, that's what he is!
Posted by Judi at 11:57 AM No comments: 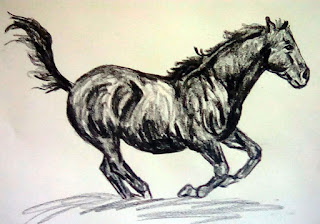 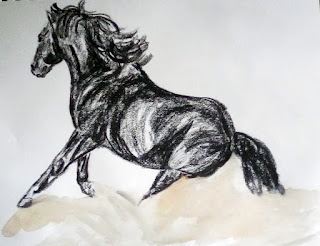