The Reunited Trio of Horsewomen

The Reunited Trio of Horsewomen

Ellen was a little nervous about it.  She has only been trail riding a short time this year, and Bella is often a handful.  The last few rides I had with her, though, have been wonderful.  I was hopeful that the ride would go smoothly.

Shari keeps her horse down the street from us.  We met at the appointed time, and off we went.  The trip down the hill and across the river were typical.  Once we got across, Shari took the lead, followed by Ellen on Dante and then me.  We began trotting right away.  Dante, usually the slowest horse in the bunch, was excited and kept up with Bella.  That made my ride easy.  We were traveling at a speed that is very easy for Cole--neither too fast or too slow.

We didn't stop until we got to the section where the trail was washed out.  Dante walked fast enough to keep up with Bella, too.  Once we got to a good section of trail, it was time to trot.  There, I saw the most amazing thing.  Dante passed up Bella and took the lead.  They only went a short way, but Bella didn't seem to mind that Dante was in the lead.  Typically, Bella will not tolerate another horse leading and will try her hardest to barrel past.

The next section of trail is one that we often canter our horses.  They all like to go faster there, regardless of the gait.  We decided to see what happened if we kept Dante in lead and trotted.  We knew Dante would enjoy leading, but we didn't know what Bella would do.  Cole is happy to take up the rear, as long as everyone goes fast enough.

Honestly, I couldn't believe my eyes.  We trotted at a great speed, and Bella stayed in place.  She wanted to pass Dante, but Shari was able to convince her that she shouldn't--and she didn't.  We went a long way, too.  It was amazing and wonderful.

Was this really our first ride all together?

We crossed the river, and on that section of trail Ellen felt better walking.  It was only her second time up there this year.  We walked to the end, turned around and walked back.  Once we recrossed the river, we wanted to put Bella in the lead.  She started to act like Starry does when he is in that spot and refused to go forward  She even took a step backwards.  It didn't take much to get her to change her mind.  She took the lead.  We showed Ellen where the tree fell--and then we started trotting, again.  Bella first, followed by Dante and then Cole,

It went great--until we were nearly at the end of the section.  There is a sandy section of trail where our guys seem to want to accelerate.  Accelerate Dante did--he took off at a gallop.  Dante had a Cole Burst.  Ellen doubted that he would attempt passing Bella, and she was right.  She was easily able to stop him before he reached her.  Ellen wasn't intimidated by the unusual behavior--she laughed.

The whole ride was terrific.  Ellen was worried in the beginning, but she ended up having as much fun as we did.  She knows that Dante will slow down to his usual self in a few weeks--and she just enjoyed him being a little bit speedier.

It was a great ride, and I am sure it is the first of many.
Posted by Judi at 4:03 PM No comments:

The other evening, I went out on a ride with Shari on Bella.  The previous ride we did together, Cole was in an odd mood and got into all kinds of mischief.  Bella started out well, but it didn't take long before she seemed to pick up on Cole's mood.  It was a very disappointing ride.  Between that ride and this ride, I rode Cole 5 more times, and he was very good on each ride.  I was very pleased, but that didn't give me anything to write about.

The ride with Bella started out good, and it stayed that way.  We got down the hill, over the river and started trotting on the other side.  On our previous ride together, Cole kept rushing up behind Bella and didn't want to stop.  On this ride, he just matched his speed with hers.

We got to do a lot of trotting--just what we like.  I don't think Bella spooked at all, and the motorcycles weren't bothering Cole.

We crossed the river at the next crossing and continued on the other side.  We passed a couple of hikers.  The horses were being so good that we were even able to chat about other things as we rode along.  On the last ride, they were so wound up on this side of the river, that we gave up and turned around early.  They wouldn't even walk quietly, let alone trot.  This time, we just trotted along; happy as can be.

At the end of this section of the trail, we decided to turn for home.  We walked quietly back to the river, crossed and decided to trot on the way home on the next section.  Why not?  They had been behaving so well.

All was going so well, I really was wondering what I would write about.  Bella was being so good.  Dante's rides were going so smoothly that I had little to write about and even Starry was willing to go ahead of Dante on our rides.  I love a good, boring ride, but what do I write about if all the rides are boring?

Bella was in the lead, as always.  I don't think we got 5 steps into our trot when I heard a loud noise to the right of us.  I automatically shortened my left rein to restrict Cole's movement.  Cole surged, but I had in in control.  I didn't want him charging up behind Bella.  A half second later, I heard another noise--and I knew--a tree was going to fall.

Since I had Cole bent, already, I spun him the opposite direction.  I could see Bella high tailing it away.  When I got Cole so he was facing the opposite direction--away from home--he decided to keep going.  I could see the hikers just standing there, watching.  Once we made it around the spin, I didn't see Bella at all.  I couldn't stop to look because the tree was still cracking and Cole wanted to join Bella; wherever she might be.  I kept spinning.  I could see the hikers again.  The tree was still cracking as we still spun.  I still couldn't see Bella as I heard the tree fall to the ground.  One more half spin, and all was silent.  Cole stopped.  We ended up looking at the hikers.

I laughed; in relief, and said to the hikers, "You sure did see a show!"  They laughed and agreed.  I turned Cole around, and was thrilled to see Bella off a short ways in the distance with Shari still on her back.

Shari said that Bella took off running.  When Shari got her wits back after the initial surprise, she was able to stop her with a one rein stop.  All was well--except we were both literally shaking.  We walked for a while for the horses--and for us--to calm down.

Shari saw what fell.  It was either the top of a tree or a very large branch that was way up high.  That is why the noise lasted so long.  It took a long time for it to reach the ground.

I had so many trees fall when I was riding Cruiser that I lost count.  I remember the last one.  We heard a noise up ahead, Cruiser stopped and looked at it.  As we watched the tree fall, he took a few steps backwards.  He was barely startled at all since there had been so many trees falling for him in the past.  This was Cole's first one and Bella's second.

The rest of the ride was lovely and boring.  Bella walked home with a loose rein.  We stopped to talk to 3 riders that we never met before.  One of their horses was a very young Saddlebred that was dancing about.  Cole and Bella didn't seem to care.

We trotted more towards home, and even though we were pretty close, it didn't make any difference.  at least no more trees fell.  I do like a boring ride, but at least this one gave me something to write about.
Posted by Judi at 3:18 PM 2 comments: 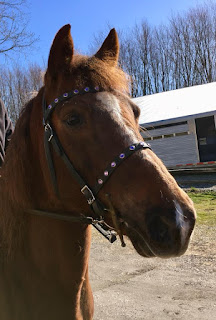 I wanted to write about Ellen's debut on the trail with Dante--and there is nothing to write about!  Of course, I am happy about that.

She pretended she had been riding him all along--and it wasn't their first trail ride of the year.  It was the prettiest spring morning you can imagine.  There are no leaves on the trees, yet, but there are some wildflowers blooming.  The bluebells just started blooming.  Ellen always starts riding Dante on the trail when the bluebells start to bloom.

We rode down the hill, crossed the river and started trotting.  She took the lead, and Dante went his usual slow speed.  I would trot and catch up, walk a bit and trot and catch up, again.  After a while, we put Cole in the lead.  He naturally goes faster than Dante.  We trotted ahead, walked until they caught up then trotted ahead, again.  It really turns out to be the same thing whether we are in the front or behind.

When we got to a section that we often canter, Cole trotted faster and Dante tried to canter.  Ellen had no trouble getting him to walk.  Dante was just making a suggestion.

After that, we put Dante back in the lead, so Cole's faster trotting wouldn't get him too excited.  That worked well.  We trotted out to the next river crossing where we met Kevin on Starry--just like the last ride--and Starry came home with us.  We stayed at a walk, and all the horses were good.  Starry even took the lead a few times without too much fuss.  Cole was happy in the middle and Dante took up the rear.

The ride finished and nothing happened--those are the best rides.  It was a beautiful ride on a beautiful day.

It's going to be a great summer!