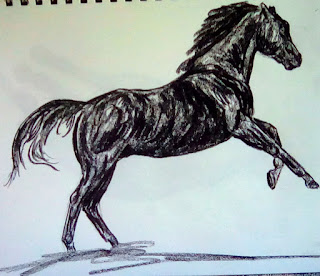 My Artwork
I have been putting my artwork here for quite a while, but I never gave any explanation.  I was one of those fortunate people who was born with artistic skills, but never had a chance to do anything with them.  They basically lay dormant for decades.  I never went to art school, so other than some very good art classes in high school, I am very untrained.
Since retirement, I have decided to wake up those dormant skills.  I'm not a very creative person, but I can draw from photos and that is what I do.  I like to think I am improving with all the practice.  I really like working in charcoal--and that is what this is.  When I want to use color, I have been experimenting with pastels, colored pencils and watercolor pencils.  Lately, I have added oil pastels, too.  The colors are great for flowers, and by practicing on flowers--I get better with colors.  Besides, I love flowers.
Not all the pictures are good.  In fact, I don't think many are good at all, but I am my harshest critic.  I just keep practicing.
If you are interested in seeing the rest of my pictures, here is a link to my blog:
https://retirementandbeyond.blogspot.com/
Posted by Judi at 4:50 PM No comments:

On the day of the real Tevis Cup, I was watching the coverage online.  Wow, those are some amazing horses.  Most of them are Arabians or Arabian crosses, of course, but there were some other breeds and one mule.  All of the horses looked so fit.  They were just a joy to watch.  I wish I could have been there on Cole.

But I couldn't be, so the next best thing is the Virtual Tevis Cup.

It won't be difficult for us to complete in the required time since we ride so much, but it is still nice to have a goal.  As you ride along on your trails, you log the miles in their website, and they will send you emails whenever you reach a milestone.  If you click on the links, the website tells you all about the milestone, shows you pictures and you can even see a 360 degree view from Google Maps.

We have also joined the Facebook Group.  It is fun to read the stories that the other riders post.  They are from all over the world.  Some are very old--some very young.  Some are doing it slowly on older horses, and some are doing it slowly on very green horses.  There are so many different types of horses, too; not just Arabs.  Many of them wouldn't suit endurance riding, but they are certainly suited for this.  The Virtual Ride gives everyone a chance to participate, and I think that is so neat.

You can still sign up if you like, but you will have less than 100 days to complete the ride. 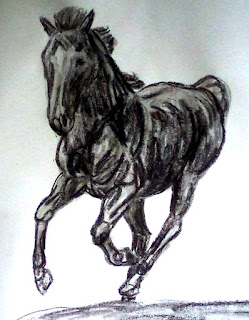 A First Time for Everything

A First Time for Everything

Kevin, Shari and I decided to go on a long ride.  We expected it would take about 3 hours since it was very hot and humid, and we knew we had to ride sensibly.
On the way out, all was going well.  Of course, Shari and Kevin were bickering; that is normal.  They were in the lead, and Cole and I quietly followed.  We kept up a steady, but sensible speed.  Since our horses are very fit, I think we sweated more than they did.
The trail goes close to the road in one section, and we saw a group of people, a horse trailer and a couple horses.  That wasn't a big deal.  As we got closer, one of the people called out Kevin's name.  It was a woman who used to ride at out barn many years ago, and after she left, we have seen her periodically when she trailered her horse to ride in our park.
As we got closer, we noticed that they were hitching up one of the horses to a cart.  We could all foresee a problem.  People are not allowed to drive their horses on our trails.  Consequently, our horses have never experienced it.  We asked them which direction they were going, and it turns out that they would be behind us on the trail.  Kevin explained that we didn't know how our horses would react.  They understood the problem and said that when we saw them, they would stop and let our horses negotiate the situation.  They shook their cart to show that they had very loud bells on it to warn everybody they were coming.
That was all I needed to know.  I was completely confident that Cole would handle it fine.  Though it would be a first for him, it wasn't for me--and I knew that Cole is usually steady with anything he can see.  That is just the kind of horse he is.  Shari and Kevin were worried, though.  Bella can be very reactive--she spooks at strips of bark laying in the trail.  Starry is a steady horse, but every now and then, he will see something that he just can't deal with.
We trotted down the trail.  as we approached our final destination, we decided we should give the horses a walk break.  They were pretty hot.  A few minutes later, since I was in the back--not bickering--I was able to hear the bells.  I turned around, and there was the horse and cart a couple hundred feet away.  I yelled a warning to Shari and Kevin and then decided to take Cole over to the cart to see how he liked it.
They asked their horse to stand quietly, and he did.  That was one well-trained horse.  I was quite impressed.  Anyway, Cole walked toward them with a lot of curiosity.  When he was just a couple feet away, his head went way up in the air and I felt him hesitate.  I asked him to continue, and he did.  He did it again just as we reached the cart, but once again he listened to me by lowering his head and continuing.  I just kept praising him and praising him.  Once we passed, I clicked him and gave him some carrots.
We turned around to see Bella, standing tall as only a National Show Horse can stand--stretching her neck out to touch to cart.  Shari clicked her and gave her a treat.  Bella was going to be all right, too.
Last, but not least, was Starry.  He did look nervous, but he loves Bella and will follow her anywhere. He did just a little dance as he passed up Bella who was standing by the cart, but it wasn't really a big deal for him, either.
We had about a half mile of trail left, so I asked them what they wanted to do.  I said we could turn and go home or follow the cart and make it a great training opportunity.  I was glad when they decided to follow the cart.
Next thing I knew, Bella was trotting alongside the cart as they went down the trail.  Kevin and I were just walking and talking about the whole experience--and then Starry got upset--Bella was leaving him!  We asked them to stop so we could catch up, and then we walked and talked with them all the way to the end of the trail.  Not once did our horses act up in any way.  Training was successful.
There is nothing like following something scary to help acclimate a horse to something new.  As long as we aren't surprised, I doubt if any of our horses will ever be frightened by a horse pulling a cart.  It was a wonderful training experience.
They were going to take a break at the picnic area, and we decided to just go home.  We said our goodbyes and had an uneventful ride home.
Posted by Judi at 5:45 PM No comments: 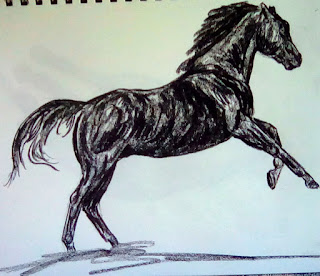