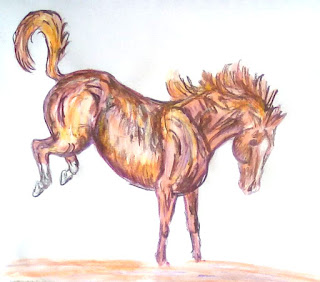 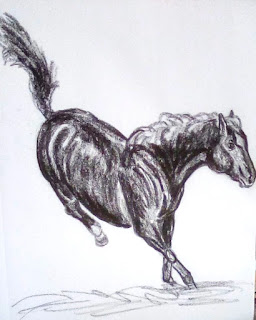 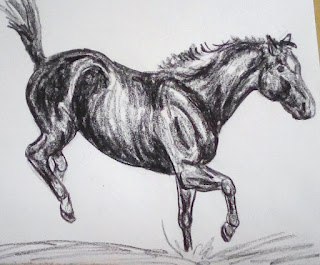 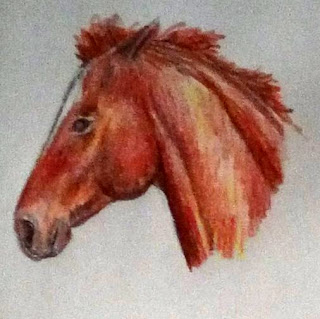 Dante
Posted by Judi at 8:48 PM No comments: 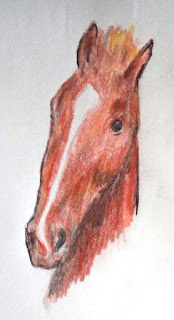 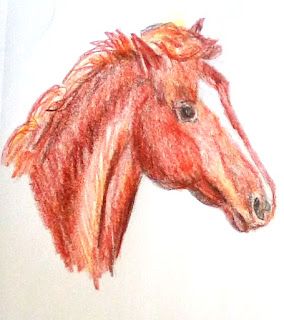 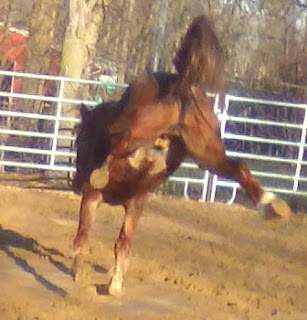 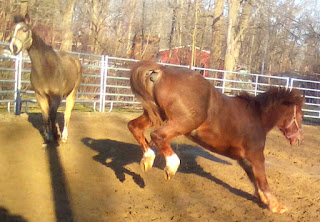 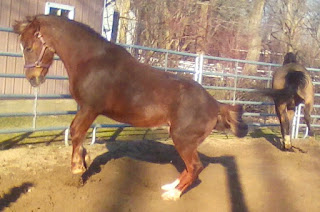 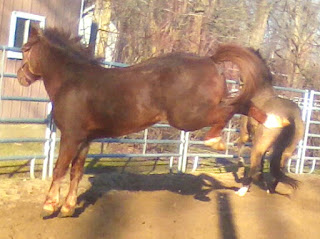 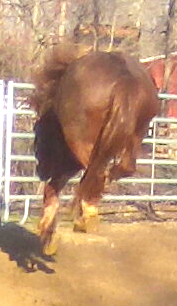 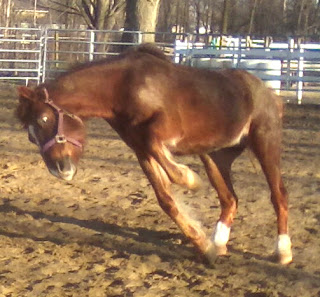 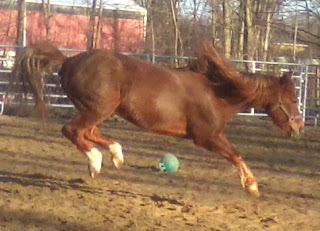 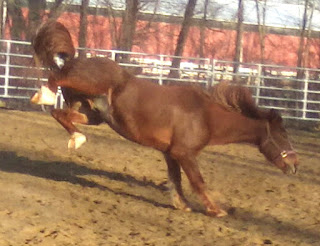 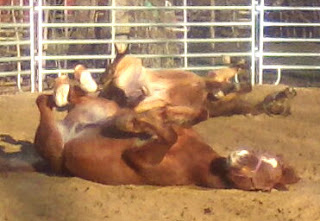 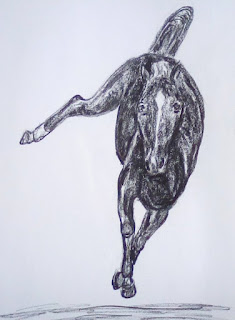 Sometimes, life just gets in the way, and that is why Shari missed our first ride.  Lucky for her, the next morning was a lovely day for a trail ride, too.  We met early, saddled up and away we went.

Cole was very happy to have his friend with him.  There was no crying.  He just marched right after her.

Bella crossed the river first because Cole was busy drinking.  During the big thaw, a couple large rocks moved right in front of our exit ramp.  Bella thought they were river monsters.  Shari got her to walk past them, turned her around and brought her back to look at them.  After Bella relaxed, they went back up the river bank.  All along, Cole was drinking and didn't seem to care one bit what Bella was up to.  I guess he is just used to her antics.

We crossed the river.  It was a little higher than the day before, but it wasn't a problem.  We walked for a little while to see what Bella's mood was like.  Her head was as low as a Quarter Horse--far from the typical National Show Horse that she is.  Shari felt she would be fine if we trotted.

For the most part, she trotted fine.  A few times, we had to stop because she got a little wound up.  I knew when I can see her ears above Shari's shoulders, that she was getting excited.  The great thing is, once we would start to walk, she brought her head right down.

On the last section of trail before the second river crossing, Cole started to get over excited.  I rode him through most of it, but I could feel I was about to lose him, so we came down to a walk before we got to the end.  We turned at the river and walked towards home.  They settled down beautifully, so we were able to do some trotting towards home.

Soon, we heard a piercing, high-pitched neigh!  That could only be one horse--Starry!  He was out on his first trail ride of spring, too.  We caught up with him, and we all went home together.  Kevin said the Starry was a little hesitant about crossing the river, but other than that, he behaved well.  Starry was very happy to see his friends.

Bella looked at the big rocks in the river as if they would jump out and bite her, but she still crossed safely.

Overall, it was probably Bella's best first ride, ever.

It's going to be a great year.

Our First Trail Ride of the Year

Our First Trail Ride of the Year

The weather in March can be really, really awful in Northeast Ohio--or it can just be spectacular.  We had one of those spectacular days.  It started out chilly--in the 30's but it was in the 60's by afternoon.  It was even sunny without a bit of rain.

If that wasn't good enough, the river was low enough to cross for the first time since mid January.  I was determined that I was going to cross it.

My alarm went off, and the first thing that popped into my head was that I was going to cross the river and go on a real trail ride.  I had no trouble getting out of bed.

Kevin had other plans and Shari couldn't make it, so I was on my own.  Well, not quite.  Ellen was going to join me on foot.  It will be a few more weeks before she is mentally ready to go on the trail with Dante, but she was glad to join us.  She drive down to the park and meet us on the other side of the river.

It was early, so the weather was still rather cold and the sun had yet to break out of the clouds.

As I rode down the driveway, Cole started to neigh for his friends.  We haven't been on a ride by ourselves in a very long time.  All winter, Kevin and I have been riding up and down the hill together.  Cole wanted Starry or Dante or Bella, and all he had was me.  He cried several times on the street and all the way down the hill, but he was still going forward, and that is the most important thing.

When we got to the river, I thought he would drink, but he took one look at Ellen on the other side, and he marched right in.  He just loves her.  I did click him for going into the water, but other than stopping for a treat, he went right across.  Ellen was nervously giving us directions from the other side, and Cole listened to her, of course.  She said that the highest the river got on Cole was just to about the center of his knees.  We could vaguely see the bottom, and I was happy to see no big rocks to circumnavigate.

Ellen greeted Cole on the other side with a treat.  (Could this be why he likes her so much?)  We then walked down the trail with her.  That sure was easy.  After a while, we got to a good section of trail to trot on.  At first, Cole refused to leave Ellen, but she backed away from us and I convinced him to go forward.

He started trotting slow, but then he went a little faster and faster.  Cole was excited.  We stopped, and Cole let out a big snort.  We turned around and walked back to Ellen, and then we continued down the trail together again.  Cole just loves walking with her.

After a bit, I decided to trot again.  Cole was more willing to leave Ellen this time.  This time, she started out fairly fast and went faster and faster.  Up ahead, I saw a woman with a huge black dog on the trail looking at us.  As I got closer, I was delighted to see that it was our friend, Julie, with her dog, Davy.   I first met Julie decades ago when I was riding a very young Cruiser.  Years later, Kevin let her ride Starry in the park.  She never did master his incredibly difficult trot.  She then leased a gaited horse at our barn--I guess she needed smoother ride.  After a while, she bought herself a wonderful Haflinger.  The only problem--she didn't keep her by the park. so we aren't able to ride with her.

Julie bought a trailer, and now she can ride her horse on the trail, but since her horse doesn't have much trail experience, she needs training.  Ellen had a brilliant idea.  She suggested that Julie bring her to a barn on our street for a few days or a week, and then we could ride with her and help her horse get used to the trail.  All of our horses are great with new horses--and we would so much love to help her.  Julie's face lit up as she imagined the possibilities.  Hopefully, she will be able to do it--and I am sure to write all about it.

I trotted out to the second river crossing.  This time, Cole ended up going very fast, and it was really fun.  I'm glad to say I had no trouble stopping him at the end.  Wow, that was fun.

We turned around and walked back to Ellen and Julie.  At this point, Julie continued down the trail in her direction, and we headed back home.  We stayed at a walk and all was going well until Cole jumped and started a power trot.  It wasn't a big deal--except for our close proximity to Ellen.  I yelled a warning and Ellen quickly scurried out of the way.  She saw the ducks landing in the river--I'm sure that is what startled Cole.

The rest of the ride was typical.  Overall, Cole was as well behaved as he was the last time I rode him in January.  It was like we never had all that time off. 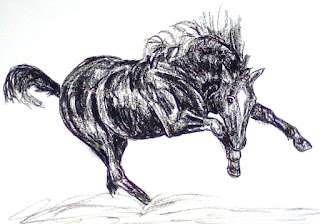 I was called for a week of jury duty this month.  This was the third time I've had to do jury duty.  I don't mind doing it.  When I was working, it was like getting a paid vacation.  I had the same schedule, but I went to a different place where I could read and relax unless I was actually put on a case.

Now that I am retired, it became a little more complicated as far as disrupting my routine.

On the first day, I couldn't ride with Ellen in the morning.  Due to the weather, it would be an indoor arena ride, so I wasn't really missing that much.  Cole would have the day off, and Ellen would take care of him.

Cole has gotten very attached to us, and if i'm at the barn--but not with him, he cries and cries and cries.  He actually starts crying about 10 minutes before I even arrive.  Once I get to the barn, I have to go to his stall right away, or he cries.  After I ride him, if I leave him to talk to someone, he cries.  If I turn him out, and he is alone, often he runs around--crying.  I've seen horses get upset when their equine buddies leave them, but I've never seen one get so upset when their human buddies leave them.  He is just a big baby.

Well, when Ellen showed up to ride, he expected me to be there, too.  When I didn't show up, he was frantic and cried out for me.  He was inconsolable.  They had to give him some hay to calm him down while Ellen was riding Dante.  If he has food, he doesn't care where I am at.

Cole loves Ellen, too, and he would have been completely happy if she spent all her time with him, but Dante needed her, too.  When she was done riding Dante, she decided to spend some time with Cole.

She only planned to walk him around in the indoor arena.  With us, there is no such thing as just walking Cole around.  He wants to do tricks, and his favorite is "silly walk."  Ellen didn't want to spend the whole time doing "silly walk," so she started to teach him a new step.  She asked him to put his head down and walk in a slightly elevated style.  Once she explained it to Cole, he started to catch on.

Back in downtown Cleveland, there I was reading a book.  They called one jury after the next, and I still kept reading.  About 90% of the people had been called out of the room, and I started my second book.

The horse gods must have felt sorry for Cole and made sure I wasn't called up.  At the end of the day, they said that all the necessary juries were filled up, and we could go home--and not come back--jury duty was over for me.

Cole is a lucky horse. 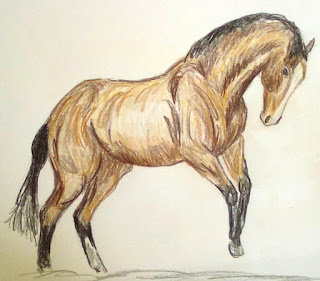 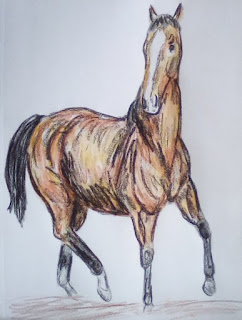 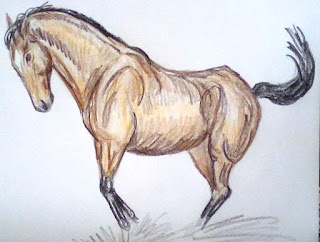