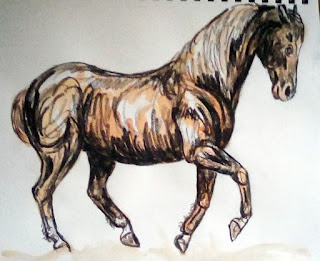 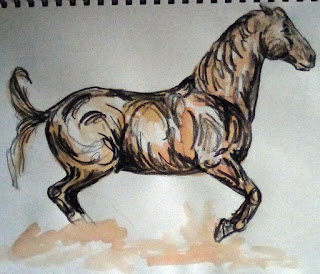 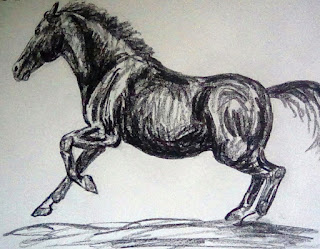 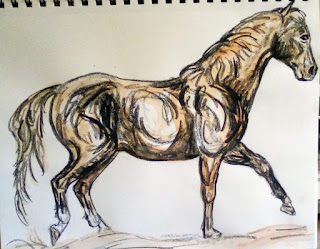 This is Just Too Much Fun

This is Just Too Much Fun

I don't really have much to write about, except that we are having a great time!  We love riding in October.  The weather is cooler, there are less bugs and the scenery leaves us speechless--it is so stunning.  We just can't get enough of it!  Cole hasn't gotten a day off in weeks.  Don't worry about him, though.  I am not riding him hard; just often. 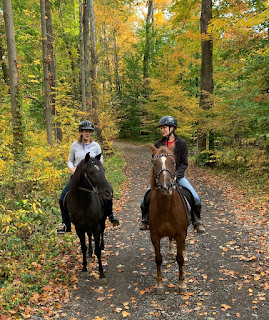 Ellen is working on letting Dante have more rein so he could stretch out more, and he is going a little faster--but he is also grabbing more branches.  He is just diabolical.  If she gives him an inch, he takes a mile!  Just the same, there are plenty of times that he moves just as nice as he does in the arena.

They have been doing some exhilerating cantering, too!  (Was that a squeal I heard behind me?  Was that Dante or the ghost of Cruiser?) 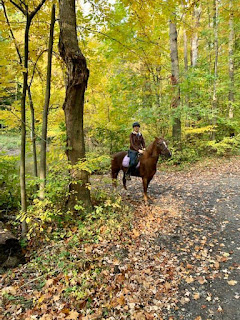 Shari is also working with Bella to improve the quality of her trot, and judging from my point of view, (behind them,) they are doing really well. 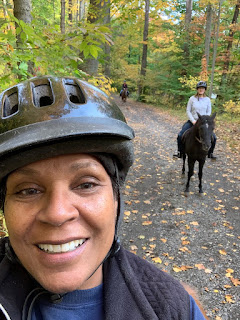 When we ride with Ellen, we do "The Dante."  We can't slow down quite down to "Dante Speed," but we do pretty good.  When Ellen isn't with us, we let them extend out.  If either one of them get too hyper, we just go back and do "The Dante."  We don't need Dante to do it.  It is great for us to be able to choose our speed.  Back when I rode Cruiser, that was one of my biggest challenges.  (The other one was getting him to pay attention to me.  I nearly always failed...) 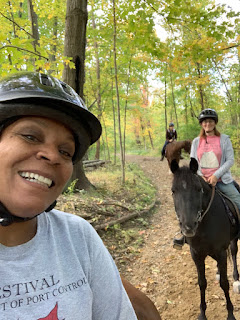 We still have trouble believing that this Bella is the same Bella Shari had when we met.  They have come so far!

Because of Shari's current hours at her job, we mostly just ride together on the weekends.  During the week, I ride with Ellen when I ride in the morning and Kevin in the evening. Starry loves having less bugs!

Cole has been doing pretty good.  Some days, he gets a little hyper and hard to hold.  Other days, he is so good, anyone could ride him.  He never gets tired in spite of all the riding.

I wish these days could go on forever... 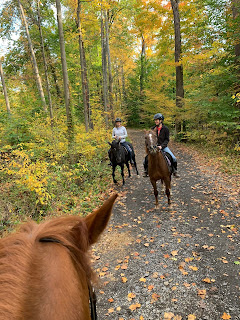 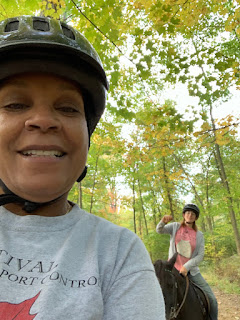 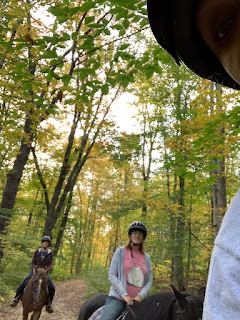 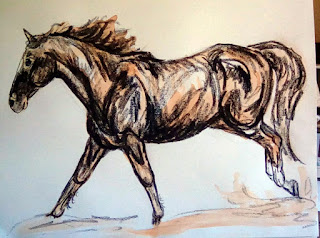 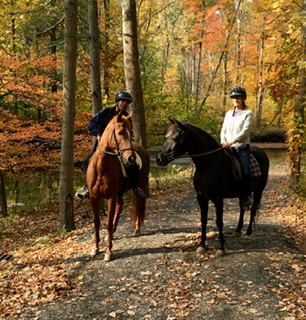 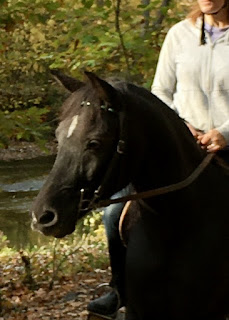 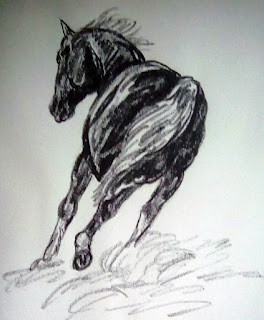 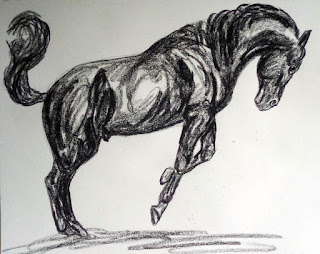 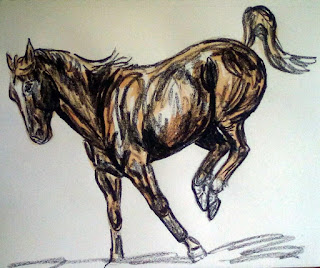 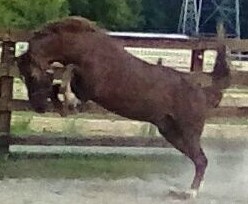 It has been a tumultuous time for us at our stables.

The first thing that happened is that our barn manager, Cookie, turned in her 30-day notice.  Honestly, she was the best barn manager I have ever had.  Before her, we experienced a lot of managers at a lot of stables, and they were never as professional and competent as Cookie.  Some had a lot of knowledge but were difficult to work with.  Others were easy to work with, but they weren't as knowledgeable.  Cookie had it all.  She was especially good when you had a sick or older horse--and we have had our share of that, too.  Her retirement was a big blow.

We were going to take a "wait and see" approach with the new management.  The stables's owner's were responsible for choosing it.  The barn owner was far too elderly to do it himself.  His son helps him, but he couldn't do everything that was needed.  They needed someone to help.

As we waited for word on that, they decided to raise the board, considerably--before they had a plan in place.  We felt we could no longer wait to see what happened and decided to leave before everyone else did and we couldn't find a place to go.

Within a few hours of reading the notice, we were checking out the stables that Shari keeps Bella.  They had 3 empty stalls and after working out some of the details, we felt we would be happy there.  We will move at the end of the month.

After about 20 years at the old stables, it will be a hard adjustment.  The new place is full care, which is a huge change.  It will be so odd to not be cleaning stalls and buckets.  It will be lovely to not worry about getting things repaired.  I won't be feeding 3 nights a week, so we will have more time and flexibility.  This all means that we can spend more time just with our horses.

We will miss our barn cat friends.

We won't be missing our fellow boarders any more than if we stayed there.  Most of them have decided to leave, too.

And, we always have our horses--and the new place is right down the street.  We will have the very same trails, too. 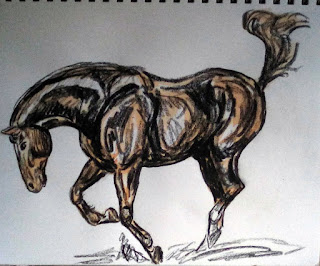 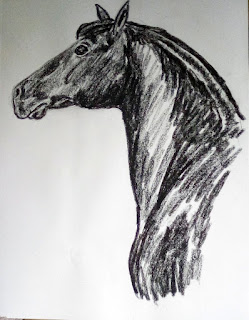 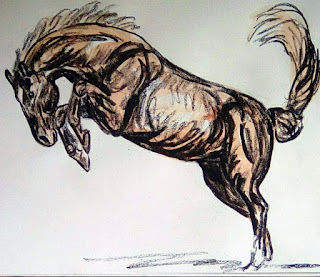 Starry, Kevin's horse, is a great horse.  Kevin is a very lucky person.  Starry is friendly and genuinely loves being around people.  If you are skilled enough to ride a terribly uncomfortable trot, he is a great horse to ride, who listens most of the time.  Very few things scare him.  So many times, things spook our horses and Starry never flinches.  He doesn't like when wild turkeys fan out their feathers, though.

In the bug-free weather, he is happy to just mosey on down the trail.  He has a fast trot and a lovely canter, but he will walk like his feet are encased in cement.  We call him Starry Molasses.

And then the bugs show up.  He transforms into a crazy horse.  He wants to trot all the time.  When we are just walking, he will prance and dance and then trot off without permission.  There is lots of belly kicking and tail swishing, too.  Even when he isn't doing any antics, he walks fast; very, very fast.

Cole normally is a fast walker, and we always have to stop and wait for Starry and Dante to catch up.  (That just about never happens with Bella.)  When Starry is in Bug Mode, we keep having to trot and catch up with him.

Kevin coats him with bug spray, and he puts a mask on Starry's face, but it really doesn't seem to help at all.  We actually feel sorry for him--but I must admit--I like his fast walk.  The last thing I want to do when bugs are swarming us is to stand and wait for him to catch up.

We had some dry weather this summer, and that decreased the bug population to a tolerable level.  Starry still walked fast, but he wasn't frantic.  Then we had a bunch of rain in September; followed by very warm weather, and there was a bug explosion.  They were worse than they had been all year.  Poor Starry.

There are points of the trail that Kevin stops Starry and gives him a treat--just because he is a good boy.  Well, Starry was so plagued by mosquitoes, he wasn't even stopping at his treat places.  He would just prance right through.

A few days ago, Kevin and I went out for a ride.  It was still warm and buggy, so we loaded up on the bug spray.  I knew there was some rain out there, but I thought we might be able to get in an hour ride.

We just got down the hill, and we thought we heard thunder--or was it an airplane?  Sometimes, it is so hard to tell.  We continued on.

Once we crossed the river, it started to drizzle lightly.  We just trotted on.  It was so hot that if felt good, and there wasn't any more thunder.

About 10 minutes down the trail, the rain got harder, so we decided to turn around.  At least Starry would walk fast, so it wouldn't be that bad.

I forgot that mosquitoes don't fly when it rains.  Starry suddenly transformed into Starry Molasses.  We were both laughing at how slow he was walking.  We did do some trotting, but we soon realized that when we wanted to walk, Cole had to go in the lead and Starry would trot to catch up with us.

When we got to the spots where Kevin gives him treats, Starry stopped and wouldn't go until he got a treat.  It was so funny.  He didn't care if it was raining.  He was in no hurry, and he wanted his carrots.

Fortunately, it was a warm day and the rain never got that hard until after we got back to the barn.  At least Starry got a break from the bugs--and Cole got a bath.