Dante is a strange horse.  He is very quiet and safe to ride on the trail, but if he hasn’t been out in a while, he gets over excited and unpredictable.  On a typical winter, we can have long spells where we are stuck inside the barn.  Usually, it is extreme cold, an icy driveway and/or a frozen river.


This year has been an exceptionally good year.  I have been able to get Cole out on the trail; even across the river at least once or twice every week or two.  Ellen has opted to keep Dante inside the indoor arena.  She doesn't’ see the sense of taking him out for a ride or two and having to deal with his “problems” only to be stuck inside for a week or so and have to start all over again the next time.  She wants to bring him on the trail, get through those first few rides and be done with it.


The last few weeks have been very, very mild.  We have made a concentrated effort to turn Dante out, outside as much as we can.  After Ellen rides him in the arena, she brings him outside, too.  In the beginning, it was just to stand and look around, but this last week, she has ridden him around the driveway.


I have been able to ride Cole on the trail, a lot, with either Shari or Kevin, and he is finally settling down and becoming reliable, again.


The long term forecast still looks good, and we are entering the time of year where we can ride on the trail regularly.  Ellen decided it was time.


I didn’t know it ahead of time.  She didn’t even ask me to come out and ride with her in the morning.  Lately, I have been going out to ride in the afternoon in the heat of the day.  It was going to be a warm morning, so I just showed up.  She had decided that if I showed up, she would take Dante on the trail.


She wanted me to lead him on the street since he is not always that good with traffic if he is excited.  The night before, I played “bus stop” with him, and he didn’t flinch at any of the vehicles, so I figured he would be good for the street--and he was.


We mounted up at the trailhead and rode down the hill.  Ellen was nervous about the river, as always, but to complicate things even more, there is now some very deep mud on the riverbanks on both sides.  Earlier in the week, a woman from our barn was riding through it and her horse panicked and went sideways, off the trail where the mud was up to his knees.  He panicked and started bucking.  Eventually, he calmed down and everything was okay, but it demonstrated what deep mud can do to a horse’s mind.


Dante is a mudder, though.  He has never been troubled by mud.  (Cole has--he hates mud.)  I told her he would be fine, and he was.  He walked down the mud, crossed the river slowly and walked up the mud on the other side.


On the other side, we tried to trot, but he started tossing his head all around and getting agitated.  Okay, so maybe that wasn’t a good idea.  We opted to walk.  Cole was in the lead, and at one point, Dante threw his head up in the air and charged past him.  That was a first.  He doesn’t like passing other horses--they make him nervous, but he evidently wanted to lead.  He must of figured that Cole couldn’t attack him this way.  (Cole has never, ever attacked him, but Dante always acts like he will.)


We let him stay in the lead, after that.  Ellen wanted to know if it would be all right if she turned around early.  She was getting nervous.  I told her it was.  She still rode on.  After a while, she decided to try trotting again, but wanted me to hold Cole back a bit.  That way, he would be trotting all by himself, basically.  I stopped Cole and let her trot.  I then walked until she stopped and then I trotted to catch up.  We had success!  We did this for short stretches all the way down the trail.  Each time she went a little longer.  Cole was a perfect gentleman, of course.  It seems he always knows what Ellen needs.


We made it to our destination--the next river crossing.  We turned there, put Cole in the lead and walked home.  Ellen still worried about the mud and river on the way home, but there was no need to,  Dante was great.  What she should have worried about was turkeys.  On the way up the hill--nearly to the top, he did a big spook.  She circled him about and he quieted down.  It was at that time that she noticed the turkeys on the other side of the ravine.  They weren’t close, but they may have been shuffling about, making noises.


I led Dante on the street, and the horse gods were smiling upon us.  No cars passed us.


Was it a perfect ride?  For Cole, it was, but Dante got a “B-.”  Still, that wasn’t bad for the first time--and he was great for the things that Ellen is the most nervous about--the street, the river and the mud.  The rest of it was him being very, very excited about being on the trail for the first time since some time in December. 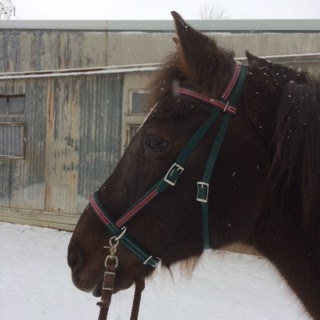 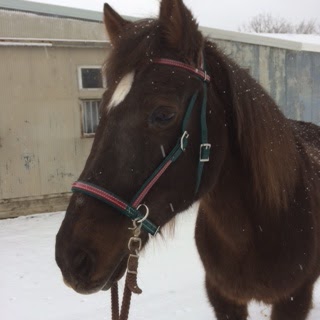 
Once again, we were able to ride with Shari and Bella on a surprisingly nice day in February.  We were even going to be able to cross the river!  It had been cold the last few days, so we knew that the ground would be frozen and rough.  The ride would be a walk-only ride, but just getting a trail ride in February is such a treat, who were we to complain?


Kevin had family obligations, so Ellen got to ride Starry.  I was on Cole, of course.  We met at our usual time and headed for the trail.  Bella seemed very excited, but sensible.  It looked like it was going to be a successful ride.


As we rode down the hill, we caught up on what we have been up to.  The river bank looked very muddy, and there was a line of inconsequential ice along the edge of it about a foot from the water.  The ice had formed when the river was a little higher, and when the water retreated, it left the ice behind.  It was about a foot wide, and so thin that it would just crumble away when stepped on.


We knew it was harmless, but Bella thought it was very dangerous.  Starry crossed, first.  Cole had seen ice like this before, so he didn’t even notice it.  I had him go next, and I hoped that Bella would see his confidence and willingly follow.  She didn’t.


Ellen and I watched Shari and Bella from the other side.  She went back and forth, back and forth.  She didn’t want to step over the horse-killing ice.  After a few minutes, I brought Cole back across to try to lure her in.  He stood in front of her quietly in the water, and still she refused.


Eventually, we gave up and went back, across.  Shari told us to go on our way and hopefully she would eventually be able to cross.


I kept looking back, and I could see Bella standing there.


Ellen and I rode out to the next river crossing and turned around to come home.  A couple minutes later, who should we see but Team Sharibella.  Bella was walking quietly with a relaxed look on her face.  Success!


After we left them, Shari reached into her clicker training tool kit.  She asked Bella to take four steps, clicked, treated and repeated--right into the river.  She crossed the river a little on the fast side, but once she got to the other side, she relaxed and walked like a lady until she caught up with us.  She was a little excited when we were walking home, but that wasn’t a surprise--she was going home, after all.  Just the same, we were very impressed by her.  It has been weeks since she was across the river.  We didn’t think that she would be this calm.


This gives us great hope for the springtime transition to trail riding.  Bella may not be as excitable this spring as she was last spring.
Posted by Judi at 11:42 AM No comments:

I live in a suburb of Cleveland, Ohio. It may seem an unlikely place for a trail rider, but that is not the case at all. We have a park system that circles the city and is consequently called “The Emerald Necklace.” Within our great park, we have over 82 miles of bridle trails to ride on. Anywhere you live in the county, you are less than a ½ hour away from the trails. Most of them are well maintained and easily accessible. There are plenty of boarding stables all along the perimeter of the park where hundreds of people keep their horses (including me.)

Typically, the trails are wooded. There are some hills, fields, marshes and a lot of creeks and rivers. My particular area is noted for a wide variety of lovely wildflowers and gorgeous views of the Rocky River. There is a large diversity of trees in the area making the fall foliage spectacular. One particularly splendid spot is an old pine forest on the top of the valley. It changes dramatically with the time of day and the time of year. I never get tired of looking up at those awesome pines. Another thing about our trails is that there are plenty of places for trotting and cantering, and we take advantage of it.

The downside of living in a very populated area is that we must share our trails with many people. I’m not just talking about other trail riders. If only it was that easy. We deal with heavy automobile traffic, pedestrians, joggers, dog walkers, bikes, cross country skiers, roller bladers and miscellaneous strollers, kite fliers, rocket shooters and even a bagpipe player now and then. Sometimes it gets rather stressful. We really have to spend a great deal of time with our horses to get them used to all the craziness out there. In a way, that is what inspired my book. If it had been easy for me, I would have thought it was easy for everyone, and I would have never written my book.