Everybody has a Bad Day, Sometimes 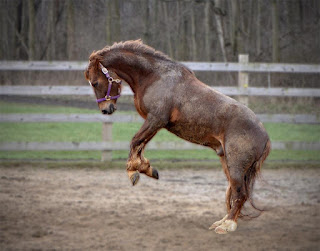 Everybody has a Bad Day, Sometimes


I have been riding Cole on the trail all winter.  Our extremely warm weather has kept the river thawed and ice off the hill most of the time.  I don’t know for sure, but I would guess I have ridden on the trail at least once or twice every other week.  In March, I have been out on the trail most days and across the river much of the time.  With all this trail riding, Cole is acting nearly as good as he does in the summer.


Last week, there was a day that the river was too high to cross, so Kevin and I rode up and down the hill, instead.  The temperature was extremely high for horses with partial winter coats, so we expected them to be very quiet.


A woman at our barn was also leading her new yearling down to play in the shallow part of the water.  We passed them on our way up the hill the first time.  They had just arrived at the bottom of the hill.


On our second trip down, they were in the water.  We caught the filly’s attention as we passed, and she neighed at us.  I think that might be what got Cole going.  He leapt into the air and charged towards Starry.  I got him back under control, but he tried to rush all the way up the hill.


When we turned around to go back down for the third time, he kept trying to trot.  He doesn’t have the kind of trot that you want to go downhill on, that is for sure.  I managed some semblance of control.  Kevin was almost clueless to my problems.  Starry was a perfect gentleman.


We turned around to go back up the hill.  The filly neighed, again.  Cole was even worse, this time.  When we arrived at our turnaround spot, here came Jack on his very hyper Tennessee Walker.  That was all I needed.  I immediately hopped off.  Jack rode past us and Cole jumped up into the air and started bucking.  If Kevin didn’t comprehend Cole’s rambunctious mood before, he sure did after that!


Kevin wanted to go down the hill one more time.  I agreed, but there was no way I was going to ride.  I lead Cole down to the river and back.  The whole time, he was rather horrendous.  The only time he did halfway decent is when I had Starry in front of us.


The next day, I rode Cole and he was back to his old self.


That weekend, I rode a couple times with Shari on Bella.  Bella had been sick, so she hadn’t been out on the trail very much for a few weeks, and she was particularly good.  We were so pleased.


A few days later, Shari was able to ride with me in the morning.  Once again, the river was too high, and we were limited to the hill.  Shari’s barn is down the street from us.  There was a bunch of machinery going on in her yard when she left, so by the time she got to the trail, Bella was a little wound up.


She seemed to settle down--until we got halfway down the hill and could see and hear the park maintenance crew cutting a tree and putting it through the chipper.  That’s all it took to send Bella to the darkside.  She wasn’t bad in a dangerous way, but she was nervous and prancy.  We tried walking back and forth on the flat bottom part of the hill.  That didn’t help.  We tried a little trotting,  and that made it worse.  We went back to walking.  She seemed a little better so we went up the hill partway, turned around and rode back down.  She was just as bad as before.  Shari looked at me and asked if we should just go home.  We did.  Bella was having a bad day.


The week previous, Dante had a bad day in the arena.  You have to understand, he is a very steady arena horse.  Some days he is a little more cooperative than others, but that is the worst he does.  Ellen was riding him in there when the neighbor started calling for her dog.  He couldn’t see her because her yard borders the solid wall of the arena.  She was calling and calling.  The disembodied voice bothered Dante so much.  His head went high and he tuned Ellen out.  Even when the person stopped calling for the dog, he kept searching for the voice.


She took him to the safe end of the arena and worked there for a while.  He did a little better.  She dismounted and led him back to where the voice was.  He did all right.  As she led him back, a door suddenly opened and made him spook.  Princess, the feline barn tyrant was in his path.  She had to dash away.  Ellen gave up after that.


She was very worried.  Her wonderful arena horse was dramatically different from what she was used to.  Her fear was that he was ruined from this bad experience.  I told her he just had a bad day, and he would be fine the next ride.  That didn’t stop her from worrying.


Of course, he was perfect the next time she rode him in there.  He just had a bad day like Cole and Bella.  Sometimes there is a cause for the bad day, and other times there seems to be no cause at all.  I wonder if there are times that they may have a headache and just don’t feel like cooperating.  One bad day doesn’t make a bad horse.


We all have bad days, sometimes….

A Week with Starry D.

A Week with Starry D.


And it was a bust.  Not that it was Starry’s fault.  It was the fault of the weather.


Kevin had to babysit his grandchildren for the week, and Ellen and I had to babysit Starry.  Two days before Kevin left, the farrier replaced Starry’s shoes with snow pads with plain old shoes.  Of course that could only mean one thing--snow.  Ellen was supposed to ride him on Saturday and Sunday on the trail.  Not only was it snowy, but it was so cold that I didn’t ride Cole on the trail, either.  March can be like that, sometimes, in Cleveland.


The snow melted and the temperatures improved on Monday, so Ellen and I were able to take him on a lovely ride with Cole.  That was our only good ride of the week.


We got rain on Tuesday, and it made the river too high.  I was out, by myself, in the evening and took him on the hill.  I was going to go three trips, but it started to rain on my second trip up, so we went home early.


I knew the river would still be too high on Wednesday, but I was hoping to do better on the hill.  It was an extremely windy afternoon.  Honestly, I have never experienced wind like that in my life.  It was constant strong winds with gusts up to 60 mph.  I took Cole out for a ride, first.  We didn’t get very far at all when we came across a pine tree crossing the trail that it didn’t look like we could go around.  I thought I might be able to lead Cole under the branch on one end, so I got off.  Suddenly, a huge gust of wind came and all the trees were waving.  I could hear cracking over my head--and I realized that I shouldn’t even be out there.  I turned back.  Starry didn’t get ridden at all.


It may be a good thing that I did turn back.  There were 3 other trees that had fallen on our trail--including one that was right where I was standing when I turned around.  There were others that fell closeby, too.  I don’t know if any of them would have fallen when I was riding, but I am glad I wasn’t there to find out.


The following day, my car died, and I wasn’t able to get out to see the horses at all.


Friday was my last chance.  It was cold, the river was still a little high but I managed to take Starry up and down the hill three times.


Kevin was back on Saturday to take him on an extremely cold ride, again.