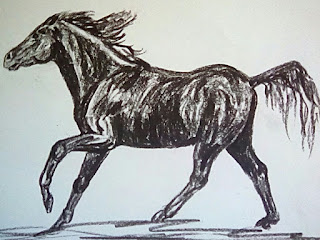 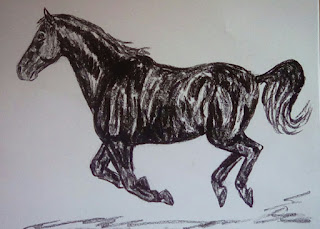 Ranger's stall is right next to Starry's, and there are bars between them.  Last spring, when Ranger was shedding, Ellen spent a lot of time in Ranger's stall; grooming him.  Starry wanted attention--whether he wanted attention from Ellen or Ranger, we can't say.  Sometimes he can be a rather annoying horse.

He has a Jolly Ball in his stall.  (You know, those balls that people get horses that they usually never play with.)  One day, he picked up the ball when he was standing by Ellen.  She clicked and treated him.  Of course, to get the treat, he had to drop the ball.  Then, he picked the ball back up.  Ellen clicked him, again, and a game was born.  He kept picking the ball up, over and over again.  If he wasn't annoying enough, before, he was now!

After a while, Ellen wanted him to do more, so she ignored him when he picked it up.  He wanted to get his treat, so he put the ball into his feed dish.  He struggled with this for only a short time before he figured it out.  He would put the ball in his dish, Ellen clicked and treated him and threw the ball back on the floor.  Starry then had to go find the ball and bring it back.  When Ellen was bored with the game, she would throw it to the far end of his stall.  He hasn't figured that out, yet.

Sometimes he would do it for me, too.  Over all these months, we would tell Kevin about Starry putting his ball in his dish, but Kevin never saw it.  Finally, it happened.  Starry did it when Kevin was there.  He put the ball in the dish seven times in a row.  Kevin was elated!

This is a perfect example of how we can train horses with clicker training.  In this case, Starry came up with the behavior and Ellen "captured" it by clicking and treating him.  Once he got good at it, she then stopped clicking him for the initial behavior, and then Starry experimented to see what would get him that click.  Then, by throwing the ball further away from him, the trick got harder for him.  We fear that he will eventually figure out getting the ball when it is on the far end of the stall, too.  Then we will be in trouble!
Posted by Judi at 3:35 PM No comments:

All Sorts of Little Things

All Sorts of Little Things

Nothing else happened in August that gave me enough to write about--except for some little things.

First off, Dante and Ellen are struggling with the second river crossing--and success seems to be right around the corner.  His problem has been slowness from the very beginning.  He is reluctant to go down the bank, step in the water and cross.  He stops a lot, and he can be tough to get going.  Ellen thought he was stopping because he wanted treats.  She tried just pushing him through--and he kept getting worse.  Her new idea is that he is pouting because he doesn't like crossing the deeper water and would prefer to go across on the ford.  She tried one trip across where she clicked him for walking and gave him treats.  The next ride--he walked across at least 50 percent better--and the best he has ever crossed that river.  We are looking forward to our next opportunity to cross to see how he does.

There was one ride that was a little weird.  We were with Bella and Starry.  On the way out, Cole was very fast and kept threatening to pass the other horses.  He doesn't do that very much.  On the way home, he was even worse.  What makes this odd is that on the past few rides, he was fantastic.

He was so bad on the way home, we decided everyone should just walk.  About 20 minutes before the end of the ride, Cole suddenly stopped and urinated!  That is something he just about never does on the trail because he goes before the ride.  He kept going and going and going... Poor Cole, his bladder was bursting.  That is when I remembered that he didn't go before the ride.  After that, he was back to his old self.  He had a reason to rush the ride.

This month, I had the opportunity to ride by myself twice in 8 days.  I used to ride Cole alone all the time when I had 2 horses, but these days, I always have someone to ride with.  I had trouble with him last year when I tried riding alone, so I was ready.  He was really pretty bad the first day.  He was crying as we went down the hill.  Once we crossed the river, he tried to run at every little excuse.  H
e even got scared of a car with a loud radio!  I would just trot him short distances and stop before he got too much momentum.  It always seems to help when he is all wound up.

The next ride--he was significantly better.  We had a nearly normal ride with a "Cole Burst" only once, and that was right before we turned around to go back home.  I am sure that if I continued to ride him alone, he would be back to his old self in just a few rides.

Here is some good news on the Bella front.  That is just the problem--Bella always wants to be in front.  Shari has been encouraging her to follow us at a walk all summer, and that has been going well just as long as we walk fast enough.  When we would try it at a trot, she would try to burst forward.  Well, last weekend, we put her behind Cole and Dante.  Starry was behind her by a very large distance, but she did know he was back there.  It seemed like a miracle when she stayed behind us as we trotted along.  That was a problem that seemed insurmountable.   It may have taken years, but there is now some light at the end of the tunnel.