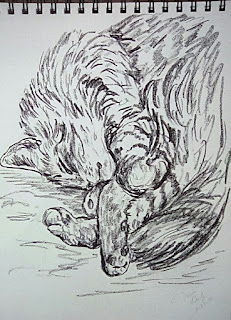 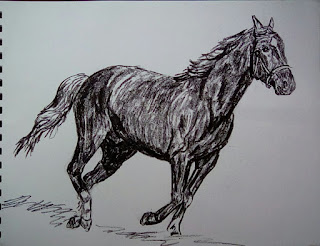 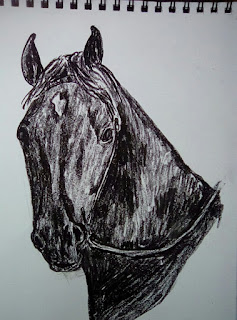 I didn't quite get his likeness in this one.
Posted by Judi at 12:03 PM No comments: 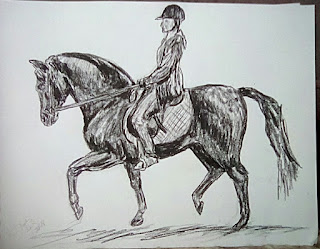 It was time to try something really tough, and it was.  Here I am riding Cole.
Posted by Judi at 12:40 PM No comments: 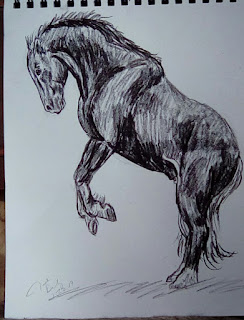 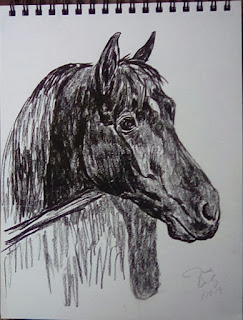 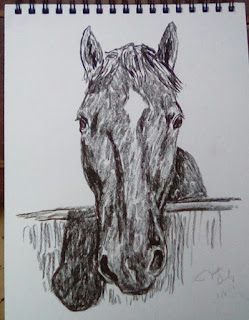 Here is my buddy, Dante, Ellen's horse.  He's as good a Morgan as you will ever find.  He happens to be a rare Lambert Morgan.

To learn about the Lamberts and see more of them, visit his breeder's website:

http://www.lambertmorgans.com/
Posted by Judi at 6:47 AM No comments: 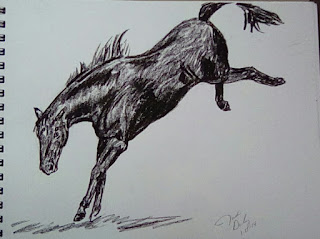 As my adventures in sketching progress, I realized I had to move away from easy cats to more complicated horses.  Here is Cole out playing.  I almost achieved what I was trying to get.
Posted by Judi at 8:23 AM No comments:

The ground is frozen, the river is freezing and I have been riding in the arena for almost a week.

I could have gotten a little time outside on the driveway, but the farrier trimmed Cole's feet a little short, and they are tender.  I rode him too much on the trail the last 8 weeks.  Since he doesn't wear his feet evenly, one side gets too low--and the farrier has to lower the other side just as much to balance them.  Shoes would have been useful this time around--but who would have thought I would have gotten so much trail riding?  I was worried this would happen, but I didn't want to lose those nice rides.  Anyway, he is fine in the soft sand.

I have been getting bad ideas in my head.  The urge to buy a second horse keeps crossing my mind--and it is just a dumb idea, right now.  Cole is young enough that I don't need a second horse--and it is just too expensive if I don't really need one.  Besides, with Ranger, there is plenty to do most of the time.  So, Ellen has been encouraging me to ride Dante in the arena.  Since I feel like I'm not getting enough riding, Dante is helping.

He has been doing better and better with each ride.  I like riding him in the arena better than Cole in a lot of ways.  He is just so smooth!!!  With Cole, I can be dripping with sweat--even on a cold day.  Dante moves just fast and easy enough for me to stay warm.  He doesn't know as much as Cole does--and isn't as near as creative with tricks and evasions.  He is just a good horse with smooth gaits.

According to the long-term weather forecast, I will be primarily riding in the arena for a while.  In a few more days, I will be able to ride Cole outside, but it is supposed to just get colder.  But that is January up north.  Time goes fast, and it will soon be spring...
Posted by Judi at 6:58 AM No comments: 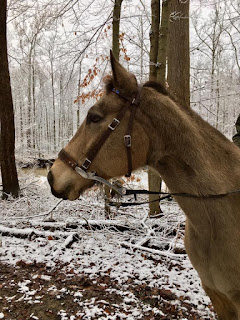 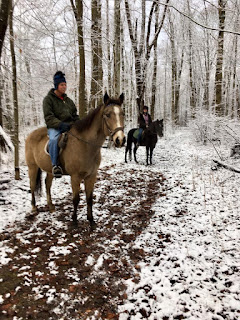 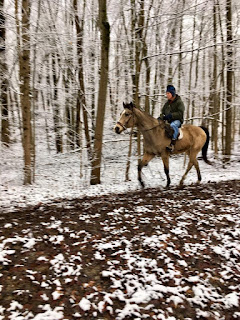 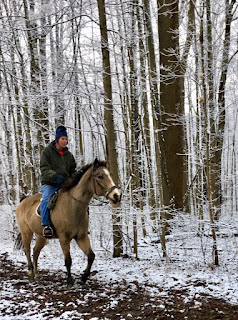 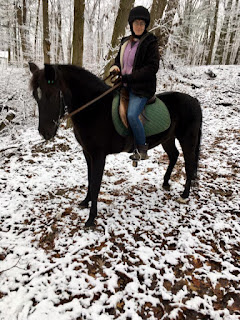 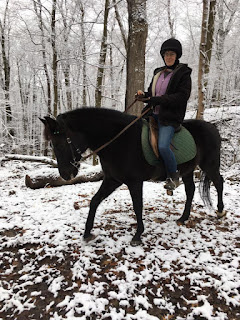 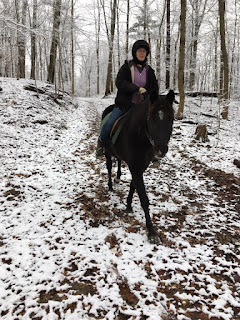 My home in the snow 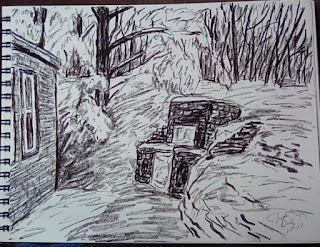 Shari and I planned to go out for an afternoon ride.  It was a sunny and warm day for January--perfect for a trail ride.

I saddle Cole in his stall because it is easier.  After brushing him, I brought the saddle to his stall--and he reared straight up in the air!  This was a first for him.  I sighed.  It looked like I was going to have a challenging ride.

I had Cole saddled up and ready to go when Shari pulled up in her car.  She just arrived because there was an accident on the highway.  She said she would meet me at the trail head in 10 minutes.  I decided I would just ride Cole in the back of the property to kill some time.  When we got back there, I asked for a trot and started singing the song of the day, "The Promised Land."  When I got to the line, "Sometimes I feel so weak, I just want to explode,"as the word explode came out of my mouth, I pictured Cole rearing up in his stall.  Ooops.  I think I should just hum that line...I didn't think I need to give Cole any suggestions.

We met Shari as planned.  Bella was full of herself, again.  She marched down the hill to the river--but then decided she didn't want to cross it.  I asked Shari if she wanted me to go first--and maybe then Bella would want to follow Cole, but she declined for fear that Bella would get stuck on that side of the river.  It happened once, before.  After a few minutes, they worked it out, but that wasn't a good sign of things to come.

Once across, we started trotting--with me humming the exploding part of my song--not saying the words.  Soon, we saw 2 horses approaching, so we slowed to a walk--and Bella's head went up.  She was worried about the horses.  Last year, she got frightened when a strange horse passed her--she spun--and Shari didn't--and went off.  Shari was worried that Bella was worried--and I was worried for both of them.  I had Cole stand still, and we waited for Bella to calm down.

She didn't--she spun around and took off towards Cole--but Shari spun with her this time.  Then Bella darted past Cole.  I was so proud of him--he didn't budge the least little bit.  Shari got Bella back under control, and I rode past the 2 horses to show Bella that there was nothing to be afraid of.  Bella followed.  Whew!

We walked a bit and then tried trotting, again.  At first, all was well.  Bella was in the lead, and I kept a lot of distance between them--just in case.  As we trotted through some  mud, Cole got a case of "mud rush" and took off running.  I warned Shari, but I got him to stop just as we got close to them.

We tried trotting again, and this time it was Bella who tried to take off.  She wasn't going to just canter off like Cole did--I saw her gathering herself together to launch.  That is when we decided that we should just trot short distances until she calmed down.  We did that--and gradually added more and more to the distance.  She still had her moments when I would see her gathering herself up, again.  When I did, I would ask Cole to halt and stand until Shari got her back to a walk.

Sigh.  She was just so wound up.  We saw Kevin coming back on his ride and invited him to join us, but he thought he would be better off alone.

We turned at the next river crossing and headed back home.  It took Bella a while before we thought she would be safe to trot.  At first, they both did well, but after about a minute, they started to pick up steam.  We stopped and stood for a few moments.  Bella reached over to eat a branch, and she pulled it.  That scared her and she spun 360 degrees!  Poor Shari.  She stayed on, but by now, I think she just had enough.

We walked the rest of the way home, and once we crossed the river, we got off and led up the hill.

It was Bella doing the exploding, this time, not Cole.  He was actually terrific.  After his ride, I turned him out to play--and then he did his own exploding with lots of running and bucking.  He is such a sight to see.  I am forever grateful that most of the time, he is able to control his emotions when I am riding him.  If only Bella could just do the same.  I know that if we can do a lot of riding together, things will work out.  They have in the past.  It is just hard for us to get a lot of rides together this time of year. 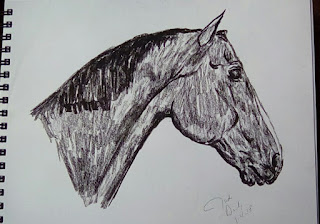 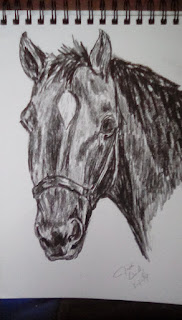