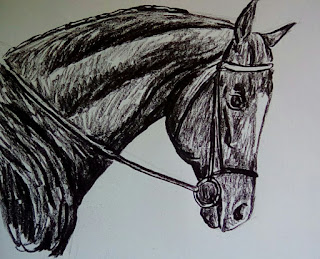 Bella
Posted by Judi at 7:42 AM No comments:

Four Days Off for Cole--Mistake 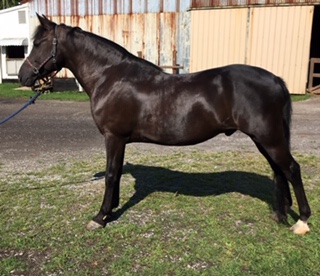 Four Days Off for Cole--Mistake

I ride Cole nearly every day when the weather is good.  We both seem to thrive on our schedule.  Cole really enjoys his time on the trail--as do I.  I do try to give him a day off a week, but things don't always work out that way.  Sometimes he has a day off after 2 weeks--and sometimes I lose count.

Well, when your trails are hard and somewhat rocky, riding that much really wears the shoes down.  Cole also has a little hind leg twist when he moves.  The outside of his rear shoes get so thin that the heads of the nails wear off.  My farrier knows just how to pound the nails in, so if there are still nails in his shoes, they usually stay on.

One thing I just learned is that my farrier goes around to other clients showing them Cole's old shoes--just to see their reaction.  Yes, they are that thin.

Well, 4 days before my farrier's scheduled visit, Cole was in a very hyper mood.  After the ride, I turned him loose in the indoor arena to roll and play.  Play he did--he careened around and around with no urging from me--kicking as high as he could.  Yes, even a horse that is ridden every day sometimes has way too much energy.

He threw a shoe.

We spent the next few days walking around the arena, doing tricks and grooming.  I finally got his mane and tail combed out.  It has been months since the last time,  He was looking great. 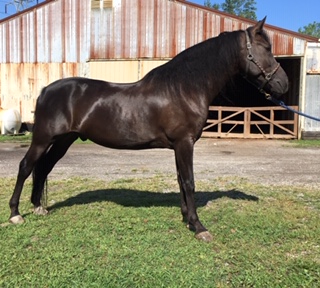 My farrier came and shod him.  We were good to go.

The next day, I rode in the park with Kevin on Starry and Shari on Bella.

Right from the start, I could feel Cole's excitement.  The ride was going to be a challenge.  As we were trotting, his energy kept building and building.  We were in the last position, so whenever I started to have a problem, I just yelled up to Shari and Kevin, and they would walk until Cole settled down.

It wasn't long after we started to trot that Cole felt like he was going to explode.  I took a stronger contact on the reins, and sure enough, he tried to pull his head down to buck.  He did some small hopping things, but I succeeded in preventing a full buck.

After that, he seemed to settle down a bit.  We got to our favorite stretch of trail, and I told them to go ahead and trot.  It was touch and go for me and Cole.  Once, he tried to canter.  I warned everyone, and tried to stop him.  He went slower and slower, but he was intent on cantering.  Finally, it felt like we were cantering in place, and he tucked his hind legs way under him--and stopped suddenly.  I had to use all my strength to keep from flying onto his neck.

We got to the next river crossing and turned around to go home.  Shari's time was short, so we didn't have time to cross.  The problem was that we had to get Cole back in the back.  Recently, we were in this very same spot, and Kevin was in the lead.  He wanted to stay in the lead after we turned around, so that meant Cole had to pass Starry.  Though Kevin made Starry stand still, I think he swished his tail.  For some reason, Starry's tail strikes fear in both Dante and Cole.  This time, Cole took off running just as he passed Starry.

Cole didn't forget that event, so when we tried to do it again--Cole froze with his head up in the air--facing Starry.  I warned Kevin, but Starry wanted to be with Bella--and he wouldn't listen.  He started to walk past Cole--aggressively.

This shouldn't have scared Cole, but it did.  He flew backwards faster than I have ever seen a horse go backwards.  That terrified Bella.  Shari shouted to Kevin to stop Starry.  Kevin was in awe of Cole's reaction, but he did finally get Starry to stop.  As we were going backwards, I bent Cole and that seemed to break him from his panic.  We then went into the woods--far from Starry and had him pass.

The rest of the trip home went really well.  We did have to stop trotting a few times when Cole got excited, but there were no more antics.  When I got back, I let Cole play in the indoor arena, and he ran and bucked and ran and bucked.  (I guess I should have let him do that before the ride.)  He was back to normal the next day.

And that is what happens when Cole gets 4 days off.
Posted by Judi at 5:35 PM No comments: 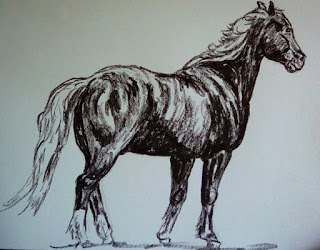 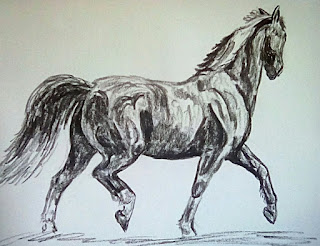