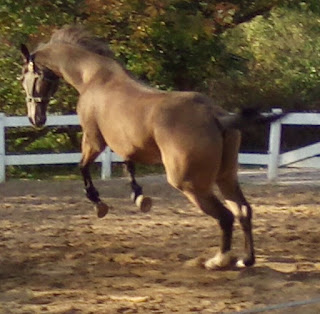 The weather has cooled down and the leaves on the trees are really starting to change.  It is a wonderful time of year for trail riding.  It is even cool enough to chase most of the mosquitoes away--no more bug spray!

Kevin and I went out for a ride over by the show ring.  It is always so pretty over there this time of year.

When we ride together, we usually put Starry in the lead.  If he doesn't do enough time leading on our rides, he will simply refuse to go in the lead.  It took us a couple years to break that habit, and Kevin doesn't want Starry to revert to it.  Also, Cole prefers to follow most of the time.  Since Starry typically goes fast enough at a trot for Cole, it works out great for us.

Well on this morning, Starry didn't want to trot fast.  The slower Starry goes, the harder it is for Kevin to post, so poor Kevin was getting frustrated.  Sometimes he would slow to nearly a walk.  Sometimes, he even did start to walk.

Kevin started worrying that something was wrong with Starry.  I kept saying that he just wanted Cole to pass, but you know how it is when you get an idea like that in your head.  It is hard to get it out.

I didn't allow Cole to pass, because that would just reward Starry for it.  Every single time Starry would slow down, Kevin said, "Is there something wrong with him?"  I tried to reassure him, but I had to admit, Starry was incredibly persistent.

In spite of it all, we did have a very lovely ride.  Even when we turned around to go home, though, Starry continued to try to stall out.  Finally, Kevin begged me to put Cole in the lead.  Reluctantly, I did.  I asked Cole to trot, and he sped off like a motorboat.  I guess he was tired of following a slow Starry.  Kevin was laughing with glee.  Starry could go fast, and he was sound.  There was nothing wrong with him.  After about a hundred feet of this with Cole only going faster and faster, I put an end to it.  Kevin was upset, but I returned Cole to his proper position.  We were mostly going to walk at this point, anyway.

Kevin did admit that when he was riding with another horse at the barn, his owner always wanted to ride in the lead.  She wants to encourage him to be a confident leader.  I suggested that they take turns.  (He did talk to her about it, and she happily agreed.)

What we were wondering was why was Starry so bad compared to all the other rides this summer?  As we walked on home, we were talking about how nice it was since there weren't any bugs pestering us.  Starry hates bugs with a passion.  He gets all agitated and if they are really bad, he doesn't even want to walk.  When he does walk, he goes much faster than he does on bugless days.

Then it occurred to us--that is why he kept slowing down and even tried to walk--the bugs weren't bugging him!  We were talking about it as Starry walked home; very, very slowly walked home.

Since then, I have been riding with Cole in the lead a few times during the ride so Kevin can trot faster.  Cole has been quite calm when we do, so it is all working out.  We just have to make sure that Starry in in the lead often enough so that he doesn't get balky about it. 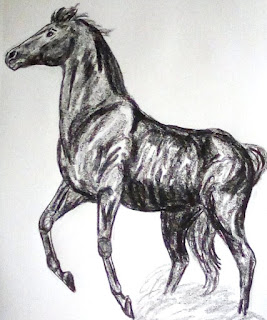 Begone Anxieties!
Wow, has Ellen been doing great in her battle with her anxieties.  A few weeks ago, she rode up to the trails by the show ring for the first time in several years.  Kevin came with us, and all three of us, (I mean 6 of us--we have to count the horses,) had a wonderful time.  The horses were all great; especially Dante.  You would think that he would be excited to be on less familiar trails, but he took it all in stride.  Our only regret was that Shari and Bella weren't with us.  Maybe next time.
And there will be a next time.  Ellen now realizes how much she blew the whole thing out of proportion.  It is an easy ride in reality.
The other thing that has happened involves that river crossing that she has struggled with the last few years.  Dante would play his little games to put off crossing; causing Ellen to get very nervous.  Now she knows that if she demands that he step into the water, he does.  Once he gets in, she will click and treat him--and then demand that he continue crossing--and he does.  He is now crossing like a regular horse.  She still doesn't like crossing that river--or any river for that matter--that will probably never change--but she can do it.  Now, even on work days when she doesn't have that much time, she will sometimes cross that river and ride for a while on the other side.
Since those bigger problems are out of the way, she is now focusing on the smaller problems.  Dante is a naturally slow, quiet horse.  That isn't such a bad thing, but he usually doesn't keep up with the other horses.  This frustrates Ellen.  Kevin and I have both ridden him on the trail, and he does a little better for us.  He tends to stall out and be slow on his upward transitions, but just for Ellen.  It's all about habits.  When Ellen was anxious, she didn't mind it so much, so she allowed him to do it.  She doesn't like it now.
When he was slow on his transition for me, I observed that Starry got very far from us in that 5 seconds, and Dante never could regain that ground.  When he did a responsive transition, we were able to keep Starry in sight.  When the other horses go out of sight, Dante doesn't care.  He just goes slower.  If she could promptly get him to trot and keep him trotting, they won't get so far behind.
Another thing I noticed when Kevin was riding him was that Dante trotted in a different manner than he did with Ellen.  (He probably did the same when I was riding him, too.)  Much of the time, when Dante trots for Ellen, he goes into his slow, collected arena trot.  Ellen is a very good rider, and she easily brings all of it out of him.  These days, Dante defaults to that trot out in the park.  Kevin was just riding--not asking for anything at all.  For Kevin, Dante was all strung out--but taking much longer strides.
Ellen's latest project is to find a way to get a ground-covering trail trot instead of a collected arena trot on the trail.  She is going to try to put it on the cue of "regular trot."  Cole has a cue for "regular walk," too.  What is wrong with our horses?  (Cole always wants to do his "silly walk.")
We are thinking that Dante will actually prefer traveling in a "regular trot," and once he figures out what Ellen wants, it will be self reinforcing.  That is how it is with clicker trained horses.  They often do what they think you want them to do.  That is great if that is what you really want, too.  Sometimes it is, but when it isn't, you need a way to explain it to them and convince them to do what we really want.
I think that Ellen might find that retraining her mind to restrain her anxieties will be the easier task then retraining Dante, but at least retraining Dante won't be so scary.
Posted by Judi at 3:14 PM No comments:

My sister and I were out on a trail ride the other morning, and we were enjoying a good trot.  Along the way, we met a fellow walking a dog that we have seen and spoken to a number of times.  He wanted to ask us a question, so though we were thoroughly enjoying our trot, we stopped to answer it.

He wanted to know our opinion on racing horses.  He had read the book "Seabiscuit," and it got him wondering about it.  Ellen told him that many horses are naturally competitive, and they love to race.  In fact, we used to have 2 of them, (Cruiser and Ranger,) and our biggest problem was keeping them from fighting to be the leader.

That made him feel better about the subject.  Suddenly, Ellen said, "My rein broke."  We use reins with snaps on the ends to attach to the bit, and the metal snap--snapped.

For many years, I used to have a piece of nylon stocking attached to my saddle for just this kind of thing.  I never needed it, and somewhere along the line, it got so cruddy that I threw it away and forgot to replace it.

Ellen tried to tie the rein to the bit, but it just didn't appear that it would hold very well.  She could lead Dante home with the other rein, but that was an option that we preferred to avoid.

I was searching all over for something.  I thought maybe she could pull the strap out of the top of her half chaps.  She gave it a tug, but it was in too snugly--then she noticed her shoelaces.  My boots have zippers, but hers have laces.  She undid one of her boots and used it to attach the rein to the bit.  It was very snug, and we both felt confident that she could ride safely.  She did say it felt funny to ride with a boot with no laces, though.

Meanwhile, Kevin was out riding behind us with the intention of catching up to us.  He saw the man with the dog, and he asked if we were up ahead.  He told him that we had a problem with a strap breaking.  Kevin always used to carry an old shoelace in his saddlebag for just this kind of thing, but when he switched saddlebags, he didn't put it in the new one.

I guess I don't have to tell you the moral of this story.

Anyway, we made it home safely.  The best thing about the whole incident is that the rein broke when we weren't doing anything!  It is good to stop and talk to friendly people even if it does break up some good trotting.