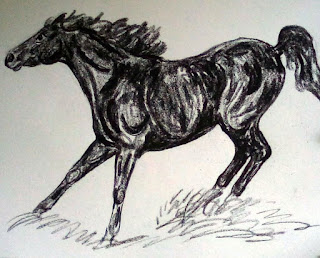 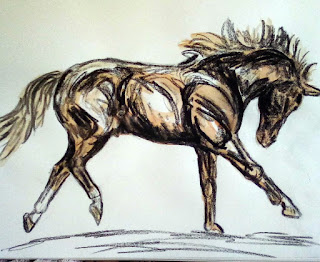 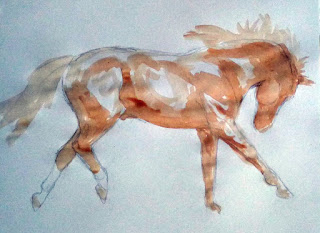 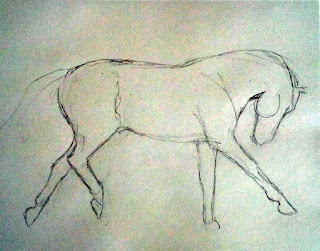 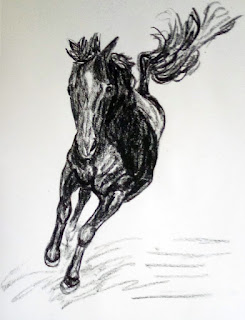 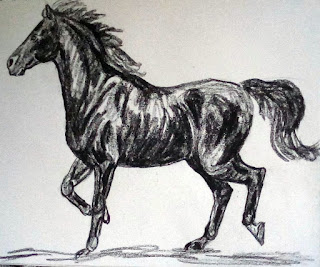 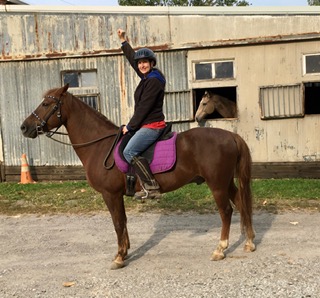 I finished it last month.  It was easy for me because I am retired and can ride every day.  Shari finished it a few weeks later.  That left Ellen--which turned the Tevis Cup into the Sister Cup.  (Shari is like a sister, so she fits right in.)

Ellen has a full-time job, so her riding is done either before work or on the weekends, so it naturally took a little longer.  That was all right.  We weren't in any hurry.

Ellen steadily piled on the miles.  Things got complicated when she started working some Saturdays.  Then there was that hurricane.  You wouldn't think that that would be a problem up in Cleveland, but it isn't unusual for us to get some hurricane rain.  This time, we got more than 4 inches.  The river flooded, of course. and it caused us to miss some rides.

Still, Ellen kept adding the miles on to her total.  As she entered the miles on the website, she would get notifications of where she would be on the actual Tevis trail.  She made it over Cougar Rock early on the ride.  The Swinging Bridge looked terrifying, but Ellen only had to cross the river ford.  There was Foresthill, Deadwood, Chicken Hawk and the Lower Quarry.  Things were going great.  We loved the pictures of the actual Tevis trail--which were so much more exciting than our modest Cleveland MetroParks trails.

And then it happened.  Dante's gait didn't feel quite right, and he took more bad steps than we would expect even on our stony trails.  Ellen started to have misgivings, but she continued to ride him.

He was still willing to trot and canter.  Ellen had to work on another Saturday, so she wanted to squeeze in a Friday morning ride.  We went a little further than we usually do on a weekday.  When he crossed at the second river crossing, he missed a step.  After that, one of his hind feet really didn't seem right. He missed plenty of steps.  We turned around and walked home.

This wasn't our first rodeo.  We both recognized the signs.  Dante had a hoof abscess.  He was coming up short and when he stopped, he took all the weight off that hind foot.

If there was any doubt, when he crossed the last river on the way home, he stopped and shook his hind foot.  My old horse, Mingo, the king of hoof abscesses, (two operations at Ohio State that still didn't stop the absessing,) would shake his hoof the day before he would go lame with an abscess.

Ellen was pulled from the competition at 96.8 miles.  She failed the last vet check.  (The Lower Quarry vet check is actually at 94 miles--right about where we decided we should just walk home because he probably had an abscess.)

We soaked the hoof when we got back.

I went out to the barn later in the day to feed the horses, and poor Dante was nearly 3-legged lame when I tried to walk him.  I soaked him some more.

Ellen had to work the next day, so I was alone at the barn the next morning--soaking as I cleaned the stalls.  I didn't have time to take him out of his stall, because I was meeting Shari for our ride.  When I got back, I led him in the soft indoor arena, and he showed improvement from the day before.  It may have busted out overnight, or my soaking might have helped it bust out in the morning while I was out riding.

Ellen was leading him around on Sunday morning when I arrived.  He didn't look like the same horse.  There was only the tiniest limp left.  This was the fastest moving abscess we ever encountered!

On Monday and Tuesday, she rode him in the arena.  He got to play outside on Wednesday, and he ran around like a colt.

Thursday was the big day.

Unlike those who ride in the actual Tevis, we can still continue the ride after we get pulled.

We figured that the ride would be over somewhere on the way up the hill on the way home.  As we approached the end, I asked Ellen how she felt.  Like me on my last ride, she also was surprised that she felt rather emotional about it.

Everyone knows that we would have still been riding all along.  We didn't need to enter a competition to motivate us--trail riding is what we do.  We are lucky to have nice trails right by our barn, too.

Our hats go off to those people who had more challenges than us.  Some people had to trailer their horses to trails.  Others were riding along the side of roads or in arenas.  Some horses came out of retirement or were young just starting their trail training.  Plenty of people had to schedule their rides around their jobs, the extreme heat, hurricanes and wildfires.

In a sense, this may have been tougher for some people than doing it all in a day.  (As far as scheduling is concerned, that is.)  In a weekend, the whole thing is over for the real Tevis Cup.

Ellen, herself, had 50-hour work weeks, hurricanes and the ever-present anxieties.

Yes, hats off to all the participators in the Virtual Tevis Cup!  They all deserve a round of applause.

If they do this again, next year, we are in!

Because of the wildfires out west, they did extend the Virtual Tevis Cup until the end of the year.  If this sounds as fun as it was for us, there is still time to sign up and compete. 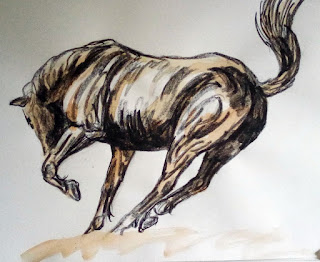 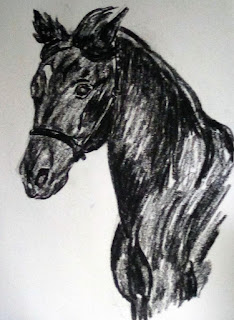 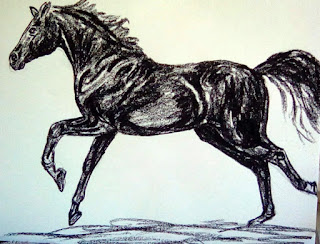 Now that I have completed the Tevis Cup Virtual Ride, we still have one more goal--the Sister Cup.  Ellen doesn't have as many chances to ride, so she still has about 30 miles to go.  We are living vicariously through her.

Since I have been riding in the Sister Cup, we have been tackling the airplanes on the hill where they fly so low.  Dante is doing much better with them.  Last month, he nearly knocked over a hiker that walked past him as a plane flew over causing Dante to spin, but she got out of the way in time, and we all just laughed.

Dante has learned to ignore the fallen log with the honeybee nest.  Well, Shari and I tackled that without them first.  Bella really freaked out and refused to pass it--dancing in the typical Bella way.  Cole was worried and watched it for a minute and then carefully passed way on the other side of the trail.  We didn't even notice the bees--but the horses sure did.  By the time that Ellen had to ride Dante past it, Cole was able to lead the way.  Dante was just fine.

The Sister Cup has had a lot of cantering in it.  Ellen decided to work on cantering from a walk.  One ride, Cole was far in the lead, as always.  Ellen asked Dante to walk, did a half halt to gather him up and then asked for the canter.  He did  the hugest "Lambert Leap" ever--and then took off at a gallop!

Dante is a Lambert Morgan.  When Ellen asks him to trot out on the trail, she will hop up, shake his head and then trot off in his usual quiet, slow manner.  We call it the "Lambert Leap."  This time, he wasn't quiet and slow!  We got a good laugh.  The next time Ellen tried cantering from a walk, he was fine.  She did skip the half halt.

What else will the Sister Cup have in store for us?  Who can predict?  What we do know is that there will be many hours and many miles out on the trails in September--the best month for trail riding.

Shari finished her 100 miles, too, and she is joining us in the Sister Cup.  Why not?  She is like a sister to us.

It will be all over way too soon, but we are enjoying every mile of it! 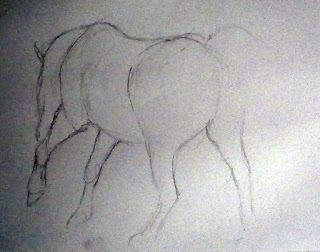 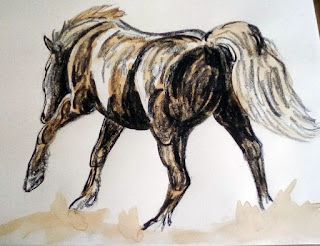