Yes, that is all we have.  It doesn’t give me much to write about.  We have started riding up to the show ring trails on the weekend.  Ellen was nervous about it, but the very first ride was terrific.  All the rides after that were just as terrific.  She is now learning to let go.  If Dante wants to travel a little faster because Cole is, she is letting him have a loose rein.  Dante is taking his new freedom in a responsible manner.

Ellen started riding on the trail during the week  with Kevin on a regular basis, too.  Those rides are going super.  One day, there was a park worker with a weed whacker that was close to the trail.  He didn’t see the horses right away.  Starry was unconcerned, and Dante was a little nervous.  Kevin’s biggest concern was whacking weeds whacking the horses.  He was able to attract the worker’s attention, and he shut it off.  That was about the most exciting thing that happened to them on their morning rides.

One morning, there was a garbage truck parked at the end of the trail once, and they were attempting to take a side trail to get by it, then the truck moved.  See what I mean about unexciting?

We haven’t even been caught in the rain!

One evening, a Peyton, a huge Thoroughbred joined Kevin and me with his leaser riding him.  It was a first time for her.  I warned her that we like to do a lot of trotting and some cantering.  She wasn’t sure how far she would ride with us.  Well, I guess she had fun because she stayed the whole time.  We walked all the way home because we know that Peyton has been giving his owner trouble on the way home.  Overall, Peyton was great.  Another uneventful ride.

We will be keeping our rides in the safer part of the park over the holiday weekend—as we always do.  The rides will be early, too.  Things can get a little crazy when people have fireworks.  After that weekend, I am hoping that Ellen will feel confident enough to start going on the “long” rides.  We never got that way last year.  It involves 2 more river crossings and a bad intersection, but once you get through that, we have lots of great trail.  It is where we took Ranger and Cruiser nearly every possible weekend day for years.  Maybe I will get some good, uneventful rides to write about, there, too.
Posted by Judi at 1:02 PM No comments: 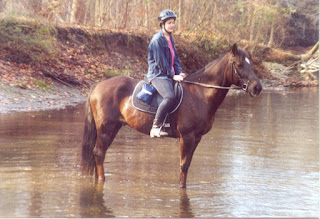 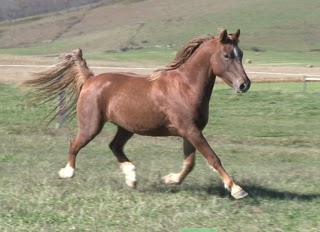 I haven’t been writing much about Ranger, but that doesn’t mean he still isn’t a very important part of our lives.  Ellen only rides him occasionally, due to his breathing issues, but we take him on walks every day.  He is a super horse to walk because he is fast –he really gives us a good work out.

Unlike the Anti-Ranger.  That is what we call Dante, because he is so opposite for Ranger.  The Anti-Ranger walks slow.  He also trots and canters slow.  Ranger, in his prime, was a very fast and exciting horse to ride.  That is only the beginning.

Ranger is a very nervous horse—and so many things get him worried.  Dante is quite mellow and accepting.  Where Ranger wants to scoot away from something scary—Dante wants to touch it.  Ranger spooks a lot.  Dante—he only spooks now and then, and they are pretty pathetic spooks at that.

Ranger is a bully.  Dante is afraid of bullies—and he is even afraid of horses that aren’t bullies.

Ranger is cautious with people he doesn’t know.  Dante loves everyone.  We have to catch Ranger and hold him before he realizes the vet is visiting him.  Dante loves the vet.

Ranger makes a big deal about being saddles.  He snarls and snarks and puts on a big show.  Dante likes being saddled.  He doesn’t even mind the bug spray.  Before clicker training entered Ranger’s life, he thought bug spray was battery acid.

Ranger doesn’t like his face being touched.  Dante wants lots of pets.  We can’t touch Ranger’s mouth or give him paste wormer.  The vet needs to tranquilize him to examine his teeth.  Dante—no problem.

Ranger is fussy about food—Dante eats everything.

When we took Ranger on trail rides, he had to be in the lead most of the time.  If he wasn’t, he wanted to race the horse that was ahead.  Often if he was in the lead, he would slow down to let the other horse get closer and then try to get a race going.  Cruiser fell for it all the time.  Dante enjoys being the leader, but he is willing to be the follower, and he doesn’t care to race, though he doesn’t always want to be left far behind.  Ranger was never, ever left behind.

No two terrific horses can be more opposite than these two.  Though Dante may be an easier horse to manage, we absolutely love them both for who they are. 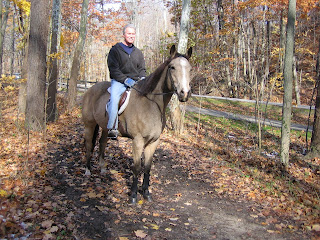 On our evening rides, Kevin and I have been going out to the second river crossing, turning around, coming back, passing home and riding out to the end of an access trail.  We call it the Access Trail—very creative, huh?

Anyway, with a lot of trotting and some cantering, this ride takes about an hour, and we like it.  When we pass up home, I click Cole and give him a treat.  Kevin doesn’t click Starry, but it doesn’t matter.  We are typically in the lead, and I give Cole his treat before Starry catches up with us.  Cole then trots on off, happily, and Starry follows.

Last night, Starry was in the lead.  As they passed up the trail to that goes down the riverbank and home, Kevin asked for a trot.  Starry took a couple steps, grabbed a branch on the side of the trail and swung out his huge buckskin body in his infamous “right angle move” and blocked the trail.  He does this once or twice a week with us.  Cole then slams on the brakes and we wait for Kevin to get Starry pointed the right direction.

Well, this time, Starry was having nothing with that.  He started swishing his tail and backing up.  He backed up into Cole, and Cole went flying the other direction.  (Cole is very sensitive to the actions of other horses, and tends to panic if they get too close to him.)  I got control of Cole, and Kevin then asked Starry to go forward, again.  Starry did more backing up and swishing, and Cole really panicked this time.  He spun away, tossed in a tiny buck and tried to run off.  I stopped him, and asked him to stand.

Starry still wasn’t going down the trail, so I said I would pass and see if he would follow us.  As soon as Cole got one step past Starry, he wanted to high-tail it away from him.  We went about 50 feet at a very fast trot, and then I asked him to stop and wait.  In what seemed to be an hour, but probably was only 30 seconds, Kevin got Starry to trot down the trail.  We continued on our way, rode to the Access Trail and turned to come home.

Kevin thought it would be a good idea to ride past home, again.  This time, we were going to go the other way along a fence that separates the trail from the road.  I suggested putting Cole in the lead to lure Starry into the right decision.  It didn’t work.  Kevin wanted to get to the end of the fence—and Starry wanted to just go home.  Cole wasn’t very happy about it, either, but he showed me by walking very slow and reluctant.  I decided we would just trot to the end of the fence and wait for Starry.

Eventually, Kevin and Starry worked it out, and they trotted to us.  We turned around and headed home.

All of this behavior really surprised Kevin.  Starry has always been the good one when it came to passing up home.  He used to help our friend, Audrey, with her horse when they would practice passing up home, and Starry used to set such a good example.

We think the issue started with Starry thinking that Cole was going home.  He was upset.  He was pouting.  Once he got the idea in his head, having Cole ahead of him didn’t help anymore.  Next time, we are going to put Cole in front, again.  No need to cause Starry pouting if we can avoid it.  (Besides, Cole and I like to trot that trail really, really fast.)

(The video is my sister's cat, Stormy, playing with her dog, Stubby.)

Cole and I have been practicing holding his hind feet forward and up for the farrier.  It was the one thing he wasn’t consistent with when my farrier trimmed his feet.  Since I am retiring and expect to ride more, he really needed rear shoes.  I have been keeping them barefoot and wearing his feet down way too far for his naturally low heels.

All the work payed off.  Ellen arrived to the barn before me because she can get out of work earlier.  our farrier had already trimmed all the horses.  He was just waiting for someone to show up to help out with Cole’s first set of back shoes.

Cole was great and our farrier was very happy.  We will continue to review the lesson a few times a week until the next time, and if that goes well, too, we will be all set.  I love clicker training.
Posted by Judi at 7:07 AM No comments: