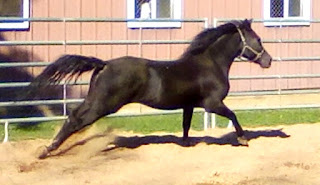 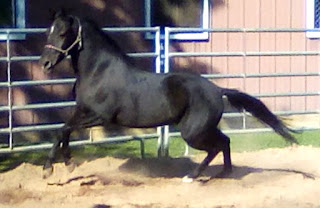 The Dumbest Thing Bella Ever Did!

The Dumbest Thing Bella Ever Did! 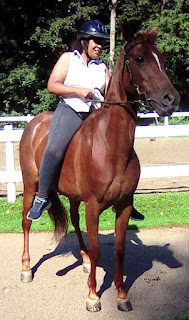 Bella is a National Show Horse, and she is known for having a lot of energy.  As is often the case, energetic horses tend to be more reactive than lazy horses.  They spook a little easier.  In the early days when we first started riding with Shari, it seemed like Bella was spooking at everything and often nothing at all.  Shari was so brave.  She did just kept riding her--and that is what she needed--lots of time on the trail.

She is so much better, now.  She still spooks at dumb things but not nearly as many of them.  Strips of bark laying on the trail gets her nearly every time.  We just laugh.

The other day, she did the dumbest thing, ever.

Shari was in the lead, followed by me and finally Ellen.  Bella reached off the trail and grabbed a branch to munch on.  It was a big one that Kevin cut back in the spring and threw off to the side.  The leaves were dead and noisy.  When Bella pulled the branch, it moved and all the leaves rattled.  Bella stood there with the branch in her mouth.  Most horses would let go, but Bella didn't want to give up her snack.  Shari warned us to get out the the way.

I turned Cole and started walking back go Ellen.  She circled Dante out of the way.  Shari asked Bella to move, and she hung on to the branch; dragging it with her--and then she panicked.  (Bella, not Shari.  Shari has nerves of steel.)  I didn't see it because Cole tried to high-tail it away--at a zigzag.  I started to go over his side, but I was determined to hang on because I wasn't going to let such a silly thing make me fall.  I hoisted myself back up and brought Cole to a halt before we reached Dante.  (Dante was far enough away from Bella and only took a couple steps.)

Shari didn't know how many times Bella spun around before she dropped the branch.  Then, Bella wouldn't pass the branch which was now blocking the trail.  Cole had enough with all of it, passed Bella right up and marched right by it.  The other horses followed.

Once everything settled down, all we did was laugh at Bella.  If you are afraid of something that you are pulling in your mouth--you should just drop it.

It did remind me of the dumbest thing Cruiser ever did.  At the time, he was just a youngster, and it was one of my early rides with him.  At least he had an excuse; unlike Bella.  I was riding in the arena and stopped to talk to Ellen by the gate.  (I'm so glad there was a witness.)  He reached back to sniff my foot.  Somehow, he got a hold of my stirrup, and it slipped behind his teeth where the bit sits--and got stuck.  He panicked and started spinning--around and around.  I didn't know how to stop him, and hit him in the neck with the whip.  That startled him, he opened his mouth and the stirrup fell out--and he stopped spinning.  He never sniffed my foot, again.

Now, the question is--will Bella learn from this?

A Tale of Two Rivers

A Tale of Two Rivers

Ellen finds crossing the river to be very intimidating.  It's not surprising.  All of us have had horses fall in the river at least once.  Cruiser did it at least 3 times, Mingo, Cole, Starry and Dante at least once and Ranger fell at least twice.  Some of the falls have been when the water was too high, but sometimes the water is low and they slip on the algae.  I really don't blame Ellen at all.  Myself, I try not to think about it when I cross.  We do cross the horses one at a time ever since the day that Cole fell and he scared Starry--causing him to fall, too.

Ellen has mastered the first river crossing, and she only gets really nervous with it when she hasn't crossed it in a while.  All of the other crossings we can avoid by going on the road, but it is safer to stay out of traffic, so we prefer to cross the river.

The second river crossing to the south is our most challenging one--and the one we cross the most after the first crossing.  We have 2 routes across.  The one that Ellen likes to take is more shallow but there are a lot of rocks to walk over.  The way that Kevin and I prefer to cross is much deeper, but the bottom is smooth.

Dante isn't afraid to cross the water, but he feels he doesn't have to because Ellen is afraid.  He draws out the river crossings to the point where Ellen is so frustrated that she doesn't even want to do them.  Last month, we switched horses a few times to see how Dante did with me--and he crossed really well.  I took him the deep route direction.  Even though it was new, he was still willing to cross.

When it was time for Ellen to start crossing again, Dante returned to his wicked ways.  He stalled, he balked, he tried to turn around--he just didn't want to do it.  After a few more rides, he started to get really good on the way home, but crossing on the way out was ridiculously slow.

Last weekend, Ellen tried once again.  After some hesitation, Dante made it clear to her that he would cross if she let him go the deep, smooth way.  It had rained recently, and she couldn't see the bottom, but she realized she had to "trust the process."  Though Ellen was terrified because the water was well over his knees, Dante crossed like a champ!  We were all in shock.

Today, I decided it was time to try the river crossing to the north.  Ellen hasn't crossed it in at least 2 years.  She tried it a few weeks ago, but she only got about 5 feet in and lost her nerve.  I had her hold Cole for me, got on Dante, marched across the river, turned around and marched back.

This crossing is the easiest of the river crossings.  The water isn't very deep, the bottom is mostly dirt instead of slippery slate and there are very few rocks in it.  After crossing the deeper river crossing, this one should be a piece of cake for Ellen and Dante.

I told Ellen we would ride to it, switch horses and I would ride Dante across.  She could then practice crossing it with Cole.  She started whining that she wanted an easy ride today, but I held firm.

When we got to the river, she just kept going.  I was waiting for her to stop so we could switch, but it just didn't happen.  In no time at all, she had all 4 of Dante's feet in the water.  She clicked him, treated him and told him to march across.  A few times, it looked like he was going to stop, but she just hit the gas and told him to continue.  He made it across just like a regular horse--no muss, no fuss.  We rode a little bit on the other side, turned around and she rode him right across in the other direction.  We were both in awe.  It was so easy!

The best part was; she said she had very little anxiety about it.  I guess when she crossed the deep river crossing, it made this one look easy--and it was.